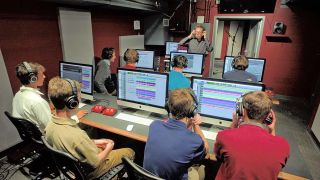 Ray Kennedy has had a lot of roles in his long career in the music industry: He leveraged a successful career as a Nashville songwriter into becoming a successful country-music artist, going on to become an in-demand recording engineer and record producer, working on records for artists including Steve Earle and John Mellencamp.

And now he is influencing the next generation as a teacher and the force behind the newly built recording classroom/lab at Montgomery Bell Academy, a Nashville boys school for grades 7 through 12. Kennedy designed the school’s new audio-production facility, where he is also the primary instructor, relying on Audinate’s Dante protocol and Focusrite’s RedNet range of Dante-networked audio converters and interfaces to create a truly interactive teaching and learning environment.

The lab, which Kennedy carved out of a space directly underneath the school’s 1,000-seat performance auditorium, utilizes the following RedNet components: a RedNet A16R 16-Channel Analog I/O interface, which offers 16 channels of Dante-networked A-D and D-A conversion with network and PSU redundancy; 18 RedNet AM2 Stereo Audio Monitoring Units, which combine headphone and line outputs for monitoring of signals from the Dante network; and a RedNet MP8R eight-channel mic pre and A/D converter. Collectively, these RedNet units give the school and its students an interactive backbone that enhances teaching and learning.

“Using RedNet, the students and I are in a two-way environment—one where I can monitor them as a class and individually—which really helps deepen the engagement between us,” said Kennedy, who takes a hands-on approach to his role.

He can monitor from his teaching station any of the six fully-loaded Apple iMac workstations in the classroom and listen through the RedNet AM2 as students individually work on their own assignments. Kennedy is then able to critique and offer advice and suggestions regarding the students' work. In addition to recording from the tracking studio, RedNet allows the ability for remote recording from the auditorium upstairs or any of the networked locations across the school’s campus.

“Using RedNet, the students and I are constantly interacting, teaching, and learning, and doing so, using a variety of spaces and environments, which really broadens their horizons as they learn about acoustics as well as the technical aspects of recording,” he said. “This kind of learning and teaching is a shared experience, and we can achieve that using RedNet.”

Students are also learning what quality audio sounds like, Kennedy added, noting the Focusrite mic pres used in the MP8R. “No other system can offer the kind of sound quality, interoperability, and flexibility of operation that the RedNet system can,” he said. “That’s why it’s a great teaching and learning tool, and that’s why we have it here at Montgomery Bell Academy.”