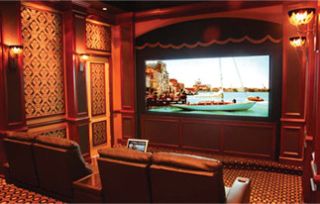 The Credit Crunch Has Struck With Asia’s Residential Systems Business Still In Its Infancy, But Global Experience Suggests All Is Not LostFrom expansive, highly automated houses in Australasia to the futuristically specified new MDUs of Singapore, Hong Kong, Shanghai, and elsewhere, Asia’s market for residential systems

Installers agree that in the current climate, selling high-performance audio and video will prove more lucrative than gadgetry for its own sake. technology is as diverse as they come. It is also a relatively young market—though Stephen Miller, Executive Director of CEDIA for Asia Pacific, points to recent whole-house automation projects in Hong Kong as “a great indication of where we can go in terms of showing potential customers what’s possible with our skills and our technologies. There is definitely the money here to pay for a high level of custom installation project.”

All over the world, custom installers have wrestled with the issue of how to demonstrate what their solutions are capable of. In Europe— and especially the UK—substantial numbers of CI companies have their roots in hi-fi and have broad experience of the role product demonstration can play in the sales process.

“We got into this [CI] business when we started asking our customers a simple question: Where do you want your music?” recalls David Graham, now a board member for CEDIA Region 1. “Customers who initially came in to buy a hi-fi system for their living room ended up asking us to design a system for their entire house, because they liked the idea of having music everywhere.”

Concealed projectors and screens are coming to the Hong Kong market in automated homes. demonstrate that? The two products look essentially the same, and both will do the job of letting you listen to your music collection while you shower.”

Nonetheless, there is a feeling among the CI community across the globe that technology for its own sake will not necessarily be enough for businesses to weather the current financial and economic storm. “Personally, I’m looking forward to selling the idea of performance again,” reflects Steve Martin, another UKbased dealer and current CEDIA Region 1 Chairman. “When you look beyond all the gadgets, nothing beats high-quality music reproduction in the home, or stunning, HD images in a home theater. Yet how many custom installers use video scalers to preserve the integrity of projected images? I would say relatively few.”

In part, this newfound emphasis on performance reflects the need to attract the custom of high net-worth individuals relatively unaffected by the credit crunch. Ask a typical US-based custom installer what has happened to their business over the past 12-18 months, and they will tell you that while the middle market has softened substantially, the top end—driven as it is by customers who do not have to borrow to finance their home-automation dreams—remains very lucrative.

The multi-room ideal: his-and-hers in-mirror bathroom TV at a Showtime Audio & Video installation. owner of Audio One, a CI business that maintains offices in Miami, Atlanta, Boston, Nashville, and Los Angeles. “We’re doing as well as we were a year ago, but we are having to work much harder than we were. We are having to run pretty fast, just to stand still.”

One of the reasons that custom installers with multi-millionaire clients seem so busy, even during a downturn, is that those clients are demanding. Indeed, as another US-based installer, Jeff Galea, puts it: “These customers became wealthy because they are demanding.”

SPECIALIST SERVICES
So, for today’s residential systems professional, putting the emphasis on performance is not an empty gesture; it requires a high level of attention to detail, not just in the design stage but also during and immediately after installation. This is one reason why consulting engineers such as Michael Chafee, who brings decades of experience in commercial audio to bear in home-theater sound design, are continuing to prosper through the downturn. Chafee favors brands that are big in the pro-audio space—Lexicon for DSP, Genelec for loudspeakers— not for their reputation but for good, practical design reasons.

“When there are a lot of speakers in a room, it’s easy to get distracted,” says Chafee. “My starting point, when I come to tune a room, is to get the stereo or 2.1 system sounding right first, with pure music content. If you do that, you find that the rest of the room tends to follow. The room response controls that are built into the Genelec active speakers allow a degree of control that is extremely useful, and the best way to deploy them is to use your ears. We do use measurement equipment, but only if there is a problem in the room that we can hear but can’t fix—the equipment can pinpoint what the problem is.”

For the big-budget customer, though, high-quality sound and vision are not enough. They expect the same level of service from their custom installer that they would from any other supplier to their business. The only difference is that the installer is more likely to get a service call out of office hours. In an attempt to reduce the level of such evening or weekend callouts, Galea developed a remote monitoring system that allows his staff to view the status of many of their installations over IP.

“I spent a lot of time trying to figure out how we could maintain our customers’ systems properly, but not do it at a loss,” Galea says. “In the end we came up with what we call a ‘white glove’ level of customer service, whereby in exchange for a fixed annual fee, the customer gets two visits per year for preventative maintenance— cleaning everything, checking for softwa re or firmware upgrades and so forth—and then, if a fault develops in between those times, we aim to have somebody on-site within the hour.

“In each of these ‘white glove’ installations, we have a 1U-high black box containing an embedded PC running Windows XP, with USB and RS- 232 connections on the back allowing IP interrogation of virtually any item of equipment, regardless of whether it was IP-addressable when it left the factory. If the PC detects a fault, it sends an email alert to our network hub, and that logs a call within our support systems. If I want, I can even get alerts on my Blackberry. That way, we know about a problem as soon as it happens.”

EMPHASIS ON ENERGY
While it is only to be expected that high-end residential customers value high-end service, what might be more surprising is the extent to which these same customers are embracing green issues. The energy-saving capabilities of many CI products are now being heavily marketed—as a quick look at Lutron’s homepage will confirm—and it seems that their appeal now extends even as far as people for whom shaving a few dollars off the energy bill has seldom been a priority.

“Money is not the issue to our customers, but ‘being green’ is extremely fashionable right now,” David Frangioni says. “People want to feel that they are making a difference, and that’s why customers are asking for it more. We consider it to be a very worthwhile cause, and it’s great to be able to make a difference with the technologies we deploy and the systems that we design.

“Some of our suppliers such as Crestron and Lutron have come out with new products that take the whole thing to another level: as well as controlling light output, AC and so forth, they provide the end customer with a means of monitoring their energy usage, and changing their settings accordingly. It is great technology to be involved with.”

Seth Jacoby, Technical Director of integration company Showtime Audio & Video, agrees. “Our customers are not worried about shaving a few dollars off their energy bill,” he says, “but over the past year there has been a real change in the way the other construction trades view us, and the reason for that is energy saving.

“We try to make a difference to the energy consumption of our systems whenever we can. When we do lighting control, none of our lights go up to more than 75 percent of full brightness, and we will always spec LCD ahead of plasma because of the lower power consumption. Even our AMX touchpanels all dim.”

Ironically, it might just be that end customers’ desire to reduce energy consumption brings custom installation closer to its ‘holy grail’ of being viewed as a construction trade in its own right—a status that proved somewhat elusive when times were less tough.

“You can put an energy-saving refrigerator in a kitchen, but the person who installs that just does kitchens— they won’t know about anything else,” Jacoby points out. “The manufacturer may know more, but refrigerator manufacturers don’t tend to visit people’s houses in person. So the other trades are coming to us because they know we can add that energysaving capability to a house. We are the only people who can do it.”

Jeff Galea takes things one step further with his vision of the global CI industry’s future: “Our company’s aim is to be the CTO of your house.” And who would argue against that vision becoming reality?

Jan Purath is a business-to-business journalist specializing in the architectural technology, construction, and interior design fields.