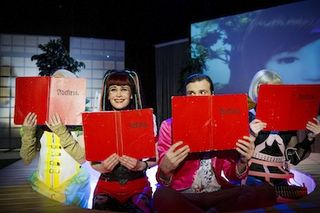 “The Jyväskylä City Theatre has two rooms, with the main stage having seating for 551 people and the secondary room being far more intimate in character—with seating for 98 people,” Vilmi explained. “As the premiere facility of its kind in this region, we wanted to ensure the best possible audio quality and the highest level of reliability. Mr. Mika Filpus, the theatre’s chief sound engineer, evaluated several brands and, based upon his findings, ultimately selected Lectrosonics.”

“Audio quality was the first and foremost concern,” said Vilmi, “and this is precisely why the Lectrosonics gear was chosen. Lectrosonics’ Digital Hybrid Wireless technology sounds exceptional and exhibits none of the sonic artifacts one typically encounters with systems using a compandor. The SMDB/E01 transmitters are extremely small and, as a result, are easy to hide among wardrobe, so they’re a great choice for theatrical applications—and with the RM remote, an audio tech can make changes to the transmitter without interfering with the talent’s wardrobe. Combine these factors with first-rate build quality and it’s easy to see why Lectrosonics excels in this type of environment.”