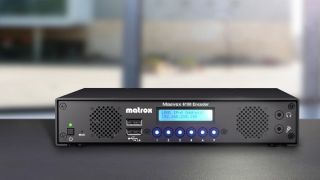 The What: Matrox has begun shipping the Maevex 6150 quad 4K enterprise encoder, designed to increase the potential encoding density for a stand-alone appliance, delivering quad 4K input capture and encode, and supporting a total of four concurrent 4K streams and recordings. This makes Maevex 6150 suited for simultaneously streaming on premises, streaming to the cloud, or recording for distribution later.

The What Else: Built on the open-standard H.264 codec, Maevex 6150 is compatible with all computers, devices, and networks, including the full range of Maevex Series products as well as third-party technologies. Multi-Chroma subsampling delivers 4:4:4, 4:2:2, 4:2:0, and 4:0:0 options to best balance quality and bandwidth demands of different encoding environments and markets.

“The density we offer is unlike anything available on the market today,” said Ron Berty, Maevex product manager, Matrox Graphics. “This isn’t a ‘stream or record’ device; it’s a multi-streaming, multi-recording device, all in one. When we talk about Maevex 6150 we’re really talking about major streaming and recording horsepower.”

In terms of management, the Maevex PowerStream Plus AV-over-IP management application provides complete reach and control over the entire Maevex network, including Maevex 6150 appliances and the Maevex 6100 PCIe quad 4K encoder cards, as well as Maevex 5100 Series Full HD encoders and decoders. For those looking for customized control, the PowerStream Plus API grants integrators and developers command-level access to build their own Maevex control application or to integrate Maevex functionality in third-party applications.

“In the past five years, we’ve defined and refined what it means to encode video,” said David Chiappini, Matrox Graphics’ vice president of research and development. “Today we can move multiple 4K desktop-quality videos at extremely low latencies over standard networks to any endpoint. This device is a disruptor in the world of AV over IP: it packs a lot of punch in one appliance, and reinforces the value of developing technologies on an interoperable platform like H.264.”