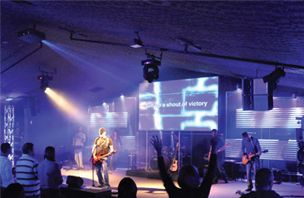 The House of Worship (HOW) market has been an astounding growth area for systems contractors over the past 10 years. With so many technologies being simplified for the end user, the days of endless training for parish volunteers has seemingly ended. Most congregations have taken the initiative to update their services with the highest-end technologies they can afford in order to win the younger generation over, and subsequently many integrators have noticed new trends in the objectives of their HOW clients.

Crossroads Church in Lithopolis, OH, upgraded to a Peavey Versarray 112 line array system for the benefit of true ribbon drivers and dispersion that matched the room well.

One trend that has been affecting the HOW market across the board is the reemergence of satellite churches that are connected to one larger worship center. Mark Siegel, president of Advanced Broadcast Solutions, explained this concept: “The campus approach between multiple locations is the biggest challenge these days. The question is how do you integrate these various facilities? People think it’s easy, but it’s extremely complex and can be time consuming and expensive. There are different models, the push model, and the interactive model, where you’re trying to link the locations. Whether you’re doing it over IP or terrestrially, it’s very easy for clients to ask for buzzwords like HD or bandwidth until they do the research and realize how much it costs.”

Kent Morris of Cornerstone Media tends to agree with Siegel. “Churches are moving toward a multi-site location, where you have a singular message. This forces integrators into doing more accessible system design. Instead of having to build an AV and lighting system for a 500-seat room, we’re building three of them for 1,500-seat rooms. What makes it difficult is that you have to think of all three projects in a simultaneous method. So you think, ‘If we go with this line array for here, will that same system be available in two years when there’s this new location, and how can we handle their cash flow issues if there’s a gap between or an overlapping in installations?’”

Besides the churches themselves changing, many integrators have seen the push toward higher-end equipment. Electro Acoustics’ Chris Jordan sees churches moving toward digital in audio. “Almost all our systems are digital now,” he said. “Rarely do we sell an analog console. Also we’ve seen a replacement of analog wire with Cat-5 cable, and almost all our systems are line array of some sort. We’re even starting to see a lot of churches that want variable acoustics so everyone can hear them sing. We know that over time, things will change, so churches want to be able to change the acoustics with the touch of a button. So they can put in a lightweight scrim, have the choir singing, and then hit a button to adjust the room for the house band.”

Like audio, high-end video is also being requested by HOW facilities. Viewcast’s Shelby Smith said that video streaming has become the first aspect of design churches are asking about now. “The mega churches used to be the only ones that would do streaming, but now we’re getting calls from smaller organizations that want to begin with streaming, which used to be the last thing they’d get into. We’ve also seen a lot more of do-ityourself live streaming. Now that most of the churches have IMAG, good switchers, and good cameras, they’ve headed from video-on-demand to being a live presence on the web. And we’re seeing a strong interest in devices that make it work easier, like one-button solutions that will leverage their existing signal chain and send it out to the web. So we have to sort of volunteer-proof for some of these big organizations, as most church services are run strictly by volunteers.”

While there are a lot of changes in the HOW market recently, its essential to grasp the reasoning behind this push for bigger productions. “The HOW is a strong market right now,” Siegel noted. “Despite the state of our economy, they seem to still thrive. What is going on in this market is that it’s extremely competitive. They’re trying to attract the youth to their ministries, and the only way they feel like they can do that is with technology. During services now they’re even doing things with texting. ‘How do you feel about this? Text your answer to us during the service.’ They want them to do it because that’s what young people are into right now, and that’s who they want in the seats.”