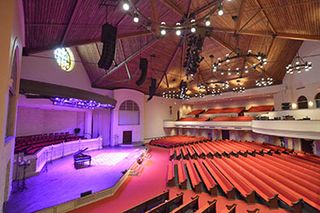 Christ Chapel Bible Church knows sound. The 30-year-old church in Ft. Worth has steadily expanded since it was founded in 1984, adding new buildings to its evolving main campus and recently opening a satellite location and state-of-the-art sound systems to each of the main venues.

Inside the Christ Chapel Bible Church.

The church felt that delivering a powerful message required a sound system that would offer utter clarity for the spoken word and clear, clean sound for a strong music program. In order to achieve all this and stay at the forefront of sound system technology for its main sanctuary, Christ Chapel Bible Church chose to purchase and install an L-ACOUSTICS KARAi line source array system – the version of KARA specifically tailored for the fixed install market.

The sound system installation was completed earlier this year by long-established Ft. Worth AVL design and integration firm Electro Acoustics. The system consists of 32 KARAi enclosures configured into four line array hangs of eight enclosures each, with each hang topped by two L–ACOUSTICS SB18i subwoofers. The entire system is powered and managed by eight L-ACOUSTICS LA8 amplifier/DSP controllers.

Electro Acoustics was largely able to use the same rigging points in the ceiling above the 1,800-seat sanctuary that it had installed for the previous system it put into the main church 10 years earlier, helped greatly by KARAi’s lightweight design. In addition to providing clear, intelligible sound for spoken word and music, the KARAi also brings wide coverage to the space. The system’s 110-degree horizontal directivity is more than enough to address everything from the front rows on the floor to the balcony seating, and four hangs easily handle the 70 to 80 degrees of coverage that Electro Acoustics president and chief steward Chris Jordan estimates was necessary vertically.

This was the first L-ACOUSTICS installation for the church and for Electro Acoustics, and both were very pleased with the outcome. “I and some of my team were attending a sound system shootout at the WFX Worship Facilities Conference & Expo last year, and when we got to L-ACOUSTICS we all just stopped and said, ‘What was that?’” Jordan recalled. “We immediately noticed that it sounded superior to every other system on the floor and decided to look into it.”

Fortunately, Christ Chapel Bible Church Technical Director Rob Wimberly was at the same show and had a similar experience when listening to the L-ACOUSTICS rig there, which reinforced Wimberly’s already high opinion of L-ACOUSTICS’ V-DOSC system that he’d heard in touring form at concerts. “Rob is a very gifted sound mixer,” says Jordan. “He really understands how music should sound.”

With that, the decision was made – the decade-old sound system in the church’s main sanctuary was due for an upgrade and it would be the newly introduced KARAi that would keep Christ Chapel Bible Church at the sonic cutting edge. “We both thought that KARAi would be a great fit for the church,” he said.