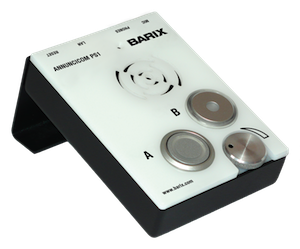 Based on the suggestion of audio engineer/integrator Alan Stricklin, Washington Family Ranch installed a multipoint Barix IP paging system this off-season. The system is fully tested and ready for the upcoming 13-week season, and delivering punch and clarity at all playout points thanks to low latency and improved audio quality.

“Our previous system was billed as Hi-Fi, but it was very hard to understand the messages with the various amps and receivers responding at different times,” said Andrew Pratt, guest services manager at Washington Family Ranch. “This past year, we just turned the amps off, which left us exposed on the liability side. We were limited in how to alert our guests if something were to happen.”

Enter Barix courtesy of Stricklin, who also uses Barix solutions at Minnesota Public Radio. The complete solution gives Pratt and his staff a compact, easy-to-use master paging station in the main office that connects over the network to playout points in high-traffic locations. Pages are streamed live to Barix IP audio decoders at these locations, which prepare and deliver the messages over loudspeakers.

The result is clear messages for guests and staff in four dormitories, the main activity center, campus store, snack bar, dining hall, kitchen and main reception building. Pratt noted this is especially important in the event of a dangerous weather or a security situation, given the camp’s rural location.

“The intelligibility is exceptional, and all our speakers are firing at the same time,” said Pratt. “We’re confident that wherever guests are standing that they will clearly hear the announcements, instead of trying to translate the messages.”

In addition to quality, Pratt cites low cost and simplicity as major benefits of the Barix IP Paging solution.

“This operates like a set it and forget it system, and I’m excited that it requires minimal management,” said Pratt. “We believe it will be the kind of system where we train people to use it at the beginning of the summer, and that’s it. The low cost of the system makes it seem as though we will absolutely get our money’s worth.”