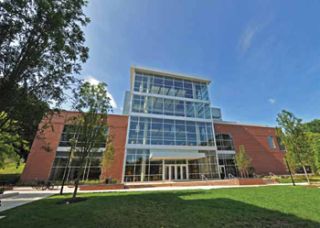 According to Andy Philip, senior systems engineer/programmer with Visual Sound, the decision to install ISP (Intelligent Signal Processing) Technologies equipment was very much driven by the client. “Frank Rankin, who is with Towson University, did the design and specification for the most part, and had his heart set on the ISP system,” he reported.

As it turns out, Rankin, production manager, event and conference services, technical operations for the university, has some history with ISP Technologies and a good working relationship with company co-founder James “Buck” Waller. “I’ve been a supporter of ISP for quite some time,” Rankin said, speaking during the final stages of the install. “I’ve had ISP systems for years here on campus. I also bought an ISP line array system for use in the stadium to pump up the volume a little bit.” Towson has even hosted demos, Rankin revealed, including one for the Naval Academy, who subsequently installed an ISP line array system.

The ballroom complex in the West Village Commons building can be divided into three identically sized spaces or a combination of those spaces. According to Philip, each room is approximately 80 feet by 40 feet, with 14-foot ceilings.

“Every speaker is three-way powered; audio and power go up Cat-5,” noted Rankin. “Why hasn’t anybody thought of this before?”

There are 50 CS 650 speakers in each room. “I have my A, B, and C ballrooms,” Rankin explained. “Each ballroom has its own six-channel controller and I have each room divided into six zones. So I can control the volume anywhere in the room.”

Philip added, “I put the first two rows on separate zones so that he can drop it down by, say, nine dB on the first row and maybe six dB on the second row. The next eight rows are on the last four zones, two rows of speakers per zone.”

He continued, “There are two air-walls that can break it up into three rooms. Frank’s got four presets he can choose from. Preset one is the three separate rooms; preset two is A and B combined, with C separate; the third is B and C, with A separate; and the last preset is all of them combined.”

As the completion date neared, Rankin enthused, “The control is going to be phenomenal.”