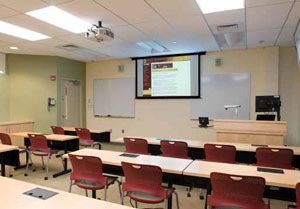 Ceiling-mounted Crestron GLS-ODT-C-500 occupancy sensors alert the Crestron MP2E or PRO2 control system to shut the AV system down after 30 minutes of no motion.

Here’s a “green AV” tip that works. Tie motion sensors into your AV system controls, so that your systems shut down if no one moves in a classroom or conference room for 30 minutes.

“We knew that end users had been leaving the AV systems on in nearly half the classrooms for two hours or longer each day, and we set out to cut that time dramatically. Still, we had to prove that the money spent on the sensors was worth the cost. We put power recorders on a test system and recorded the amount of power used, as well as how often it was left on with no one in the room. With this test, we figured out that the sensors would pay for themselves in only one year.”

In 2007, Bryant began a green initiative, which, so far, has been able to reduce the amount of energy used on campus by over 35 percent—a savings of more than $20,000 per year. Gregg and the IT staff hoped to extend those savings through greater efficiencies in the AV systems.

“We’re constantly trying to figure out ways to make our systems as power friendly as possible,” he explained. Just over a year ago, Gregg began experimenting with Crestron occupancy sensors, adding them to five classrooms during the spring term. “They seemed to work very well. We had no complaints from users that the systems were shutting off early, and we confirmed that they shut off as programmed. So next we deployed 20 more rooms.”

“The idea came from Mike Bohan at HB Communications,” Gregg explained, “but we’ve been able to do most of the work ourselves.” D epending on the size of the room, IT technicians ceilingmount a Crestron GLS-ODT -C-500 or GLS-ODT -C-1000 occupancy sensor, and Gregg programs the Crestron MP2E or PRO2 control system to shut the AV system down after 30 minutes of no motion. “We have also set the NEC projector in each room to shut down after 10 minutes of no signal and, as a failsafe, RoomView sends a System Off signal at 10:30 p.m. each day.”

“The biggest power hogs are the projectors, so we shut them off right away,” Gregg explained. He also sets the system to shut down flat-panel displays, amplifiers, DVD -VCRs, and document cameras. “The Crestron processors stay on, so we can see the system in RoomView, but they don’t take much power in standby mode.” Gregg said they only have four or five audio processors on campus, and so far they are keeping them on, as they would need to sequence them on a little earlier than the rest of the system in order to load all their settings properly. They also leave their video conferencing codecs on.

By the end of August 2011, more than 100 AV systems on campus had been upgraded. “We still have a couple of stragglers, but only because they don’t have control systems,” he explained. “We will put those in soon.”