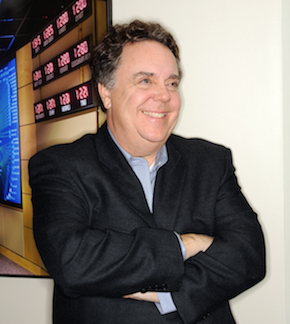 For John Whitlock, the path to forming one of the world’s largest commercial audiovisual integration firms began with a shopping trip. While practicing law for his family firm, his father dispatched him to investigate IBM’s first personal computer after reading about it in the newspaper. He eventually came back with the first Compaq computer, the original Novell network, and the original Hewlett-Packard printer. From that point, he was hooked on technology and the potential it had to transform the operations of businesses.

“Preparing the 20-megabyte hard drive to run the network took 24 hours of computer processing, and trying to keep that running was intricate,” Whitlock recalled. “So hooking them together and keeping them running, and a friend of mine and I did a lot of programming—writing programs to make our office run, and I kind of learned a lot more about accounting doing that than I did in business school.”

Eventually Whitlock purchased a computer reseller business, and began to build momentum across the state of Virginia as a supplier to large corporate clients—work he described as being quite similar to the business of being an integrator. In 1991, while seeking a coveted Apple authorization to be a true one-source supplier, Whitlock acquired Audio Fidelity, an Apple education reseller specializing in education products, including overhead projectors, carts, and VCRs.

According to Whitlock, the timing of this acquisition was perfect. “There’s always some new buzzword, some new way of describing the industry,” he said. “And at that point, the word ‘multimedia’ was just starting to be thrown around. But it just seemed like a combination of the products in the computer world that we were in, and the products that Audio Fidelity was doing, might just be what they were talking about.” So he went about adding some key people to help him run the business, including Doug Hall, the current CEO of Whitlock.

By 1995, Whitlock sold off his PC business to a large Wall Street firm and began focusing all of his resources on Audio Fidelity, which by then was known as Whitlock Broadcast and Presentation Solutions. “We were around 29 employees at the time, with two locations, about a $5 million-a-year company,” he recalled. “And we’ve been on a fun ride ever since.”

John Whitlock with his wife and three eldest children at a University of Georgia football game. Whitlock attributes the success he’s enjoyed throughout his career to his creative spirit and his knack for setting those around him up for success. “I’ve always been intrigued with interesting opportunities and seeing if we can turn them into reality,” he said. “You combine that with the other thing that I really love to do, I describe it as being a ‘resource provider:’ I love to find great people and give them the resources that they need to be successful, to achieve their goals, and that combination has worked a number of times for us.”