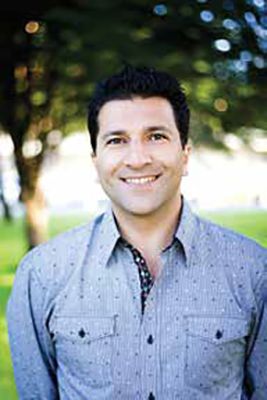 If listening is the most important element in successful dialogue, then Fardad Zabetian has got it nailed. Ask him a question and he’ll answer it, but don’t expect knee-jerk immediacy. He’ll take it in, digest it . . . maybe request clarification…and then reply. In a society full of so much noise, it’s refreshing; you feel like he is actually, truly listening to you, rendering his responses all the more thoughtful.

Fardad Zabetian Possessing good listening skills shouldn’t be such a big deal for a businessman––it’s something most of the world’s most famous entrepreneurs would credit for their success. But in Zabetian’s case, listening is at the core of his profession. On the surface, he’s in tech, but really he’s in the business of helping people communicate better, and thus, understand what each other is trying to express.

Growing up in Iran, Zabetian’s story begins in his home country, where he was running a small business providing language labs for universities. On a business trip to the CEBIT trade show in Hanover, Germany, he first encountered teleconferencing technology featuring language interpretation. Having grown up in a place where conflict, he felt, was largely the result of misinterpretation between people from different cultures, this was his “eureka!” moment: surely, people increasingly needed to be able to communicate, in their mother tongues. (Zabetian himself speaks three languages: English, Persian, and German.) In 2002, in the San Francisco Bay Area, he founded Media Vision to address this growing need.

Today, Media Vision’s conferencing solutions target corporations, educational institutions, government agencies, and international organizations with a line-up of wired and wireless technology including conference microphones, multimedia meeting terminals, simultaneous language interpretation systems, electronic voting systems, and systems that enable multilingual remote participation. At 30 employees––“and growing,” Zabetian underlines–– the company is headquartered in Oakland, Calif., with offices in Washington, D.C. and New York, N.Y.; Toronto, Ont.; Paris, France; Geneva, Switzerland; Belgium, Brussels; Copenhagen, Denmark; and the United Kingdom. What began as an interest in the world of diplomacy and language interpretation has evolved into a focus on audio intelligibility in all meeting environments—from the U.N. to the boardrooms of Fortune 500 companies.

Annabelle Gazzo In 2009, Zabetian met Annabelle Gazzo, who, as the company’s director of marketing, is his partner in business, as well as his partner in life. Back then, Media Vision was in the early stages of its North American expansion, and Gazzo (also trilingual; fluent in her native French, as well as English and Spanish), as Zabetian puts it, “added the European dream to my plan.” Gazzo’s education in international business law largely contributed to this effort, especially in French-speaking territories. (Among its employees, French is the unofficial “official” second language of the firm.)

While Media Vision’s team enjoys a rich cross-cultural work culture, it also benefits from its exposure to its cross-cultural clients. Zabetian, who says he’s racked up 120,000 air miles in the last year, recognizes how valuable this experience is, especially in the firm’s line of work. “I would say that one of the benefits of being from the Middle East is being able to understand different cultures between East and West,” he said. His educational background, which combines electrical and computer engineering with business development, has also enabled him to be multilingual in a business sense: “I understand both ends, and that helps me on the job, day to day, to be able to communicate both on the technical side and also on the business side.”

Like the best partnerships, this one is complementary. “Fardad is driven by a goal and a passion for reaching it,” Gazzo said. “He is both a visionary and a doer. What most impresses me is his ability to seize the momentum and make things happen quickly. Plus, he never settles on ‘good enough’.” Gazzo, Zabetian says, helps to shape this vision and make it a reality. “Annabelle’s side is attention to details and planning, and rethinking and reconsidering,” he said. “It’s a very good balance.”

Ranking among Inc. Magazine’s Top 1000 Fastest Growing Companies in America two years in a row (#535 in 2013, and #939 this year) expansion remains Media Vision’s main goal. Zabetian notes that diversification is a big part of this, both in terms of geography and vertical markets. “When you build a business that is very diversified in different markets and economies, it helps you to really focus on product and expand in a way that is based on the opportunities that are coming your way, not on a single project,” he said.

Gazzo points out that the firm’s growth strategy is taking into account a multitude of variables, including how the use of meeting spaces is changing, and how intelligible audio plays a key role in this. “In recent years, many meeting rooms have been equipped with high definition video displays, leaving audio considerations aside,” she said, “but a videoconference without good audio is reduced to a mime show. Many end-users think they need large screens and small mics, and then they have to deal with the aftermath of such installations.” She notes that one of Media Vision’s endeavors is to educate tech managers on what crisp, clear audio should sound like so that they can tailor their purchasing decisions at the outset. “The goal is to improve audio intelligibility in meeting environments, from tens to hundreds of users.”

Fardad Zabetian and Annabelle Gazzo in the Plenary Hall of the United Nations General Assembly in New York, NY. Every piece of equipment that Media Vision offers sits on a network, reducing the discussion around AV/IT convergence to “an old story,” Zabetian said. “In project design and implementation, AV and IT considerations are interdependent.” The company’s Paperless Media solution, for example, incorporates all of the features found in traditional conferencing systems, such as the microphone, electronic voting, and language interpretation, but in an all-in-one terminal (with a tablet form factor) that utilizes the full suite of Microsoft Office Readers for document viewing and sharing. “This solution embraces the convergence between AV and IT by replacing the multiplicity of devices in boardrooms––including laptops––and keeping attendees focused via dedicated communication tools for superior intelligibility.” Attend, Media Vision’s multilingual remote participation solution, enables meeting attendees who are off site to listen and speak in their language of choice, making use of the interpreters that are at the meeting venue.

Zabetian relays that the majority of Media Vision’s projects these days require software customization. He notes that this process is facilitated by the fact that their manufacturing partner, Taiden, has an in-house software department, which speeds things up when clients require custom solutions. “Every organization has different software that is unique to their needs, so when we come in, we have to be able to communicate with existing databases and existing workflow that they have in place without requiring our client to duplicate their efforts to use our system,” he explained. “If there is already a database that manages 5,000 executives, with their access ID, voting rights, and so on, our conferencing and voting equipment needs to communicate with this database without any human interface. This is one of the examples of the customization that we do.”

While the BYOD movement, as well as the rising availability of machine-based translation systems, is showing up in some meeting rooms, Zabetian notes that these solutions are not suited to high-profile meetings where, quite literally, a country’s fate could hang in the balance. “We don’t think that there is going to be any replacement for our technology that does intelligible audio conferencing as well as simultaneous interpretation,” he said. And “interpretation” is the key word here: a machine can’t really interpret context. “Most of our clients are heavily focused on quality, and the meetings that they need interpretation for are high-level meetings. They completely rely on professional, trained interpreters who are knowledgeable with the topic, and they can interpret the concept, the message, and not word by word.”

Carolyn Heinze is a freelance writer/editor based in Paris, France.