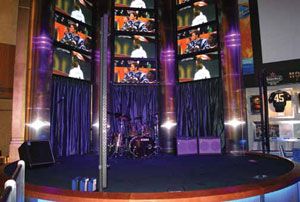 A rounded stage located in a corner made speaker placement a complicating factor.

JOLIET, IL—By nature, the gaming industry and an element of risk go hand-in-hand. When casinos are planning their AV integration, however, nothing can be left to chance—all systems need to be thoroughly thought out and work exactly as expected to keep visitors entertained around the clock.

These principles were in play for a recent major renovation of Hollywood Casino Joliet (HCJ), a humming casino complex 40 miles southwest of Chicago that rebuilt its entertainment/dining pavilion after it was destroyed by a fire in March 2009. At the center of the sonic considerations there was Hollywood Stadium, a hugely proportioned sports bar/live entertainment venue that would require some problem solving to get the sound exactly right.

HCJ turned to Brewster, NY -based Altel Systems, working in a strategic partnership with SportView Technologies of Brighton, MI, to design and install the pavilion’s AV systems. Surveying the site, the team saw a combination sports bar/live music venue that was an approximately 60 x 125-foot room with 45-foot-high ceilings, primarily concrete construction, and a uniquely shaped and positioned stage. The result: numerous acoustic and sightline challenges for the experienced integration team to overcome. Specialized Productions (SPI) was the AV consultant for the project with Mike Tully, vice president of SPI, being engaged by the casino to design a proper live performance system for this unique space.

“This was both a sports bar and a large-performance venue with a very high ceiling, and not many boundaries to separate it acoustically from other areas of the casino,” explained Tom McNerney, vice president of operations for Altel. “In addition, the stage was round, but placed in a corner, which made it a bit of a question as to where to place the speakers due to concerns about gain before feedback. From past experience, Mike Tully with SPI suggested that we take a strong look at the K-Array performance systems available from Sennheiser.”

Complicating things further was the presence of a 60-foot frontprojection video wall directly adjacent to the stage, ruling out the possibility of flying line arrays from the ceiling due to the shadows it would cast. Needing low profile and high fidelity simultaneously, McNerney and his colleagues arrived at the Sennheiser K-array loudspeaker system using two KK 200 arrays—a compact, line array element comprised of 32 x two-inch neodymium transducers in a strong stainless steel chassis—mounted to poles on either side of the stage, plus four KL 108ma subwoofers mounted inside the stage, and supplemented by a quartet of KF12 self-powered monitors for the onstage performers.

Measuring just six feet tall and two inches in diameter, the pole mountings supported the ultra-slim KK 200 arrays, preserving the line of sight to the performers from anywhere in the approximately 300-capacity venue. With a horizontal throw of 110 degrees and a vertical throw of seven degrees, the KK 200s proved ideal for getting extremely clear sound everywhere that the venue required it.

Complicating things further was the presence of a 60-foot front projection video wall directly adjacent to the stage, ruling out the possibility of flying line arrays from the ceiling due to the shadows it would cast.

“The K-array provides wide dispersion horizontally and very narrow vertically, which keeps the sound off the floor and the ceiling,” McNerney said. “It also had no problem throwing to the distance of the far end of Hollywood Stadium, which is well in excess of 70 feet. The sound that the system delivers is extremely clean with plenty of bottom end. You would think that a line array with two-inch cone drivers might have problems keeping up with the low mids needed for the crack of a snare drum, but they handle it extremely well.”

“The K-array was also very easy to install,” McNerney continued. “We didn’t have to go through any of the rigging design qualifications— we’re not talking about hanging several hundred pounds of loudspeakers from a roof. Instead, the fact that you’re just clamping these six-foottall, 18-pound slender line arrays onto a two-inch NPT-style pipe makes it pretty easy.”

For the stage, Altel and SPI also specified a selection of Shure microphones for instruments and vocals. All audio leads to an Allen & Heath iLive R72 digital mixer at the FOH position, which is where monitors are also mixed. An Allen & Heath iDR-16 iLive fixed format MixRack is the DSP and I/O heart of the system, fed from the stage by a lone Cat-5 cable.

“Being able to use a single Cat-5 connection certainly makes for a simple system from an infrastructure standpoint,” noted McNerney. “There are many signal transport formats, whether it’s CobraNet, ACERIU , etc., over Cat-5. They all have some nice benefits, and it’s fabulous to be able to put 24 or 32 inputs for a system onto a single piece of cable, and also handle mixing monitors from FOH as well.”

Finally, the system was tuned using an Ivie IE-45 real-time analyzer. “That system is helpful because it runs off of a laptop using software and a microphone that connects directly with your computer,” McNerney said. “You can capture screenshots, save the files and refer back to them whenever you need to later on.”

With Hollywood Stadium in Joliet successfully reinforcing Top 40 dance music, country, smooth jazz artists, and beyond, the venue’s standout sound is an essential part of the casino experience. “People are accustomed to hearing great quality audio everywhere, so we need to make sure that’s something we always provide,” McNerney observed. “Gaming facility projects require a nice mix of technology, and interesting challenges that are different from venue to venue. It’s a fun, dynamic environment to work in.”