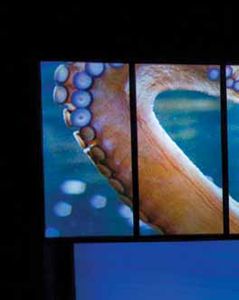 Discovery contacted Blu Laser Digital to present a short 3D presentation that would capture the heart and style of its future 3D network for its upfront meetings held for potential advertisers. To project the 3D portion of the event, Blu Laser used Barco DP2000, NEC 2500, and Christie CP2000 projectors. For the rest of the 2D presentation, Barco 18Ks were overlayed on the main 30- x 15.5-foot screens, and the six adjacent screens were rear projected by Panasonic 10Ks.

With the advent of 3D television on the horizon, the Discovery Channel recently announced its intent to create a 24-hour 3D network that will utilize the 3D capable sets currently being released to the market. To introduce this venture to its potential advertisers, Discovery contacted Blu Laser Digital to present a short 3D presentation that would capture the heart and style of its future network.

Partnering with Sony and IMAX, Discovery’s 3D network will open up the possibilities of 3D television. “Its goal was to put together a piece for the media that was representative of this, which is going to be available for viewing on the channel once it launches,” explains Robert Sullivan of Blu Laser Digital. “It produced some original material for the piece especially for this, and wrapped it into a 3-minute and 16-second piece. Its idea was to educate its audience of advertisers worldwide of the future when adding 3D to their brand. This was similar to what it did when Discovery introduced HD Theater, which became a tremendous success for it.”

To create a platform for the showing of this short segment of the presentation, Sullivan consulted with the network in order to find the most universal way to show the piece. “Discovery had never been involved in 3D production before. It wanted to bring the best possible quality while being representative of what will be available in the home,” notes Sullivan. “My first suggestion was, since the viewer’s homes would be active glasses environments, it should discuss active glasses solutions for its upfront meetings. The company was very enamored with that suggestion. It also aided it in the postproduction process; its people were on a timeline to get the piece completed by the first screening.”

By going with Sullivan’s suggestion, the company ended up getting the product ready for viewing in the nick of time. “One of the hidden values of an active matrix solution in 3D viewing is the absence of High Gain Screens or of a ghosting removal process, which is very time consuming,” says Sullivan. “Dolby 3D requires a custom ‘High-Gain 1:8 screen and The RealD method requires both a Silver Screen a ghost-busting process, which is a software add-on to the postproduction process of making 3D. This required pre-production time that wasn’t available to the network, so we literally got the final media from Stereoscope Studios six hours before the first screening. We ended up doing the final encoding on the jobsite. If it had been required to do the ghostbusting, it would have needed an entire extra day to get that done.”

The media was then quickly converted for the upfront meetings. “The value that Blu Laser Digital gave to the production is that they took an active interest,” commented Bernie Laramie, executive producer of Stereoscope Studios. “They were at the facility during the post production process to be sure that the deliverables were properly encoded for the final presentation in time for the upfront meetings.”

Blu Laser contacted Xpand for their 3D glasses technology because it happens to be releasing a set of glasses, the X103, that work with all of the representative monitors being released from any of the brands

To achieve the glasses atmosphere of a home viewer, Blu Laser contacted Xpand for its 3D glasses technology. “We had an actual 3D active matrix eye glasses setup, which the optics were representative of what people would be viewing in the home through the active matrix LCDs that are being distributed by Panasonic, Sony, or Samsung. We chose to work on this with Michael Williams of the glasses manufacturer XpanD, because it happens to be releasing a set of universal active shutter glasses, the X103 - that work with all of the representative monitors being released from any of the brands.”

After Blu Laser Digital received the content from Bernie Laramie at Stereoscope Studios, BLD designed a 3D presentation delivery platform for corporate events to show off the piece. “Initially, we requested the format from the client, who decided on 1920 x 1080 progressive,” recalls Sullivan. “It was being mastered in 23.98, though for broadcast it would end up being 60i. It will eventually have an AC3 package of 5.1 for broadcast, but for the Upfront presentation, Warren Tash and Jimmy DePalma of DePalma Productions decided to go on an expanded stereo or a 4 channel- WOW package as the company called it. This was essentially stereo with a left and right surround added, so four channels total. This was its choice for encoding the audio for the meetings. What it provided us was a DPX image sequence that we encoded a JPEG2000 package for our prime and an MPEG2 package for the backup, both with four channels of audio.”

For the video, Blu Laser used an array of servers. “We used two different servers for the video, but the main feed used the Doremi V1-HD-2K 3D version,” explains Sullivan. “We’ve done some design modifications with Doremi where we create a mirrored drive design that allows us to have both the prime and backup media recorded on the JPEG2000 server. To control the Doremi V1-HD-2K 3D server we used a proprietary software called 3D Slowmo, which has control software for all the play functions of the device, and that’s a software we license. For the backup media, we used the Doremi Nugget MPEG2 server and we did all the encodings in house using proprietary asset management software.”

To project the 3D portion of the event, Blu Laser used Barco DP2000, NEC 2500, and Christie CP2000 projectors. For the rest of the 2D presentation, Barco 18Ks were overlayed on the main 30- x 15.5-foot screens, and the six adjacent screens were rear projected by Panasonic 10Ks. A Hyundai reference monitor was also used in the projection booth.

Blu Laser Digital suggested active glasses solutions to Discovery for its upfront meetings, which it ended up going with based on it being representative of what will be available in the home.

“DePalma Productions has produced the Discovery Channel upfront meetings for the last 14 years,” notes Sullivan. “They handled most of the production aspects, including the regular presentation and all the audio and cabling, and we handled the 3D presentation. A line array provided by DePalma & LMG was used for all four channels of audio; playback was done on the direct outs of the playback devices so no additional mixing was necessary. They just took four analog outputs into the mixing console, and those were sent direct out and left alone, all pre-produced.”This was its choice for encoding the audio for the meetings.

In addition to the main presentation, there was also a post event party that ran the 3D portion on a loop for attendees. “In each of the locations for a post event party we had two 60-inch DLP monitors playing the 3:16 of 3D from the event on loop, so the attendees could put on the XpanD 3D glasses and check out the video on the TV as if they were watching it at home,” expands Sullivan. “So we did a separate encoding for that, and it gave people another opportunity to see the piece without having to rely on their memory from the main event. And that was such a success that Discovery called me last week to have my crew set that part up again for an event at the International 3D society in Beverly Hills that Discovery sponsored.”

What was so important about these upfront meetings is that this type of event is completely new to staging. “No one has done an upfront for a 3D network before this one, and they were very optimistic about bringing an unknown into their production 30 days away from the first meeting,” notes Sullivan. “Our biggest challenge was to design the platform for distribution to each location within the time frame they requested. Two of the cities were very tight, L.A. and N.Y.C. We had a bit more time to be prepared for Chicago. N.Y.C. had two shows overlapping each other.”

It seems as if the appearance of 3D in presentations will not be a fad in the future, as it has been many times before. 3D is seemingly here to stay, as Sullivan explains: “My phone has been ringing off the hook from many other major players, regarding adding 3D to their current meeting schedule. We’re very fortunate to have been able to provide this platform design for Discovery and to be able to use it in a cost-effective way for other 3D providers.”