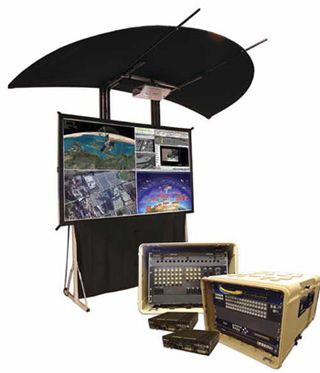 According to PESA’s Dan Holland, “The military is increasingly reliant on high-resolution video to assess visual intelligence data and transform it into actionable intelligence.” Featured here is the PESA CATops Video Distribution Unit. Anyone who has ever hurled their mobile phone against a brick wall will tell you that electronics can sure be fragile. And while many of the environments that house integrated AV systems pose little threat to their physical well being (including, we’ll kindly assume, end-users), there are a number of applications that demand AV to toughen up. Rain? Sleet? Bright sun? Impossibly thick walls? Old buildings? Hurricanes? Rapid deployment? If you’ve needed to ensure reliable audiovisual performance in any of these conditions, read on.

For those that are on the move in extreme environments, PESA, based in Huntsville, Alabama, offers its CATops (Command and Tactical Operations) Video Distribution Unit (VDU). Designed for mobile applications where quick deployment is crucial, CATops utilizes broadcast television technology which enables first responders to share uncompressed, full-motion video via routing switchers, multi-window processors and computer-to-video conversion technologies for command and control, and tactical operation centers.

Holland noted that the CATops is ideal for command and control, intelligence, surveillance and reconnaissance for mission critical, mobile command and control environments, such as the military, law enforcement, emergency and disaster management, security operations and remote field command ancontrol shelters. Based on SMPTE transmission methods, CATops provides cross-platform compatibility between computers, full-motion video and live digital broadcast—a nod to the U.S. Department of Defense, which often requires compliance to ensure end-to-end interoperability with other video distribution equipment.

Holland also pointed out that image quality is paramount for a military operation: “The military is increasingly reliant on high-resolution video to assess visual intelligence data and transform it into actionable intelligence,” he explained. “This demanding environment is ideal for PESA products that are based on standards developed by the Society of Motion Picture and Television Industry, virtually eliminating issues like inconsistent image quality, noise, and image degradation.”

He added that for other rapid deployment applications, such as disaster relief, emergency medical efforts, search and rescue, and rough-terrain command and control, CATops features a video presentation and playback system for viewing of mapping and tracking, or medical imaging for operating rooms or medical training.

What happens when you need to hang a video display, but there is no nearby electrical outlet to feed it? The answer was obvious…until now. As of this fall, users will no longer have to compromise on video display placement, thanks to a solution from Altinex. The company’s new Muse technology allows for the distribution of power, HDMI, and IT control signals up to 300 feet over one single Cat-6 cable.

“We have seen situations in old buildings, where because of the look and feel of it, the owners do not want to run conduit through the wall. Or, they are not able to because it’s a brick wall,” explained Jack Gershfeld, president and CEO of Altinex, headquartered in Brea, California. “They can’t put power through the wall, so the only way to do it is external. What Muse allows you to do is to make it almost invisible, because you are running at Cat-6 cable versus running a conduit.”

Digital signage systems, such as those utilized for emergency notification, can also benefit from Muse, Gershfeld notes. “Imagine you have a school, and part of the emergency system are the displays that direct people around if there is an emergency,” he illustrated. “With Muse, you can make the emergency displays completely independent of the power.” An uninterruptible power supply would serve as Muse’s main source to distribute video and power to the monitors. “Then, if the main power goes out, the UPS comes on, and all of the emergency displays come up to show people where to go.”

For maintaining signal integrity in any environment, especially in older or historic buildings, Rebekah Paul of Opticomm-EMCORE says that the company’s fiber-based products would be applicable since, “Fiber is better than copper for delivering signals through all sorts of challenging situations, such as old lines next to the new line that could cause interference and to go longer distances.”

BRIGHTEN UP—The SL46B is Samsung’s new “super-high brightness” indoor display solution. Paul explained that tech managers of historic and other buildings that have older technologies and wish to upgrade to fiber, but do not want to replace all their equipment, the company’s HDMX offering could serve to convert those signals to fiber and save money. It is a case-by-case basis, however, depending on the client’s needs and whether you want to distribute video signals throughout an entire building or a campus. “When the need for the advantages of fiber arise, we are a good solution to keep costs low” Paul said. For example, with the Optiva and openGear line of products, you can buy what they need now and when needs expand, you can daisy chain the new signal requirements to the previously-purchased cards in the same chassis.

Renowned for the durability of its microphones, Shure puts its microphones to the test long before the manufacturer’s customers have access to them. Shure’s humidity test, for example, places microphones in a chamber set at 80 degrees Fahrenheit, with 95 percent humidity…for 10 days. But Shure doesn’t stop there: hot storage and operational testing exposes microphones, on a long-term basis, to temperatures ranging from 120 to 140 degrees. Bet you never thought you could torture a microphone? Apparently, you can.

This rigor was especially appreciated by one Dr. Karl Berg, who, while a docterate student at Cornell University, conducted a research project that involved analyzing the communication habits of, yes, parrots, at a wild parrot research center in Venezuela. To capture audio in the country’s tropical climate, Berg selected Shure SM57 mics. But while the SM57s resisted the weather just fine, there was one significant issue: “The physical design of the [SM]57 was mistaken for a black snake, and parrots hesitated to get close to it, wanting to avoid exposure to predator danger,” he explained.

But this didn’t mean that Shure couldn’t provide something that was not only heat and humidity-proof, but birdproof as well. Turning to the company’s line of SM11 lavalier microphones, Berg affixed the discrete mics to the parrots’ nests (made out of PVC piping) with a tie clasp. The result? Five months’ worth of parrot-talk—and a better understanding of the similarities in speech between parrots and humans. For more information, check out www.shure.com.

Stay in Control, Whatever the Weather

Equipped with a customizable, highcontrast LCD display designed to be viewable even in bright sunlight, the remote features eight programmable soft buttons and 33 programmable keypad buttons for frequently used applications. All buttons offer tactile feedback, and the unit is programmable via RTI’s Integration Designer software. Additional features include RF transmission through walls and cabinets, power sensing for reliability, and RS-232 communications for advanced control applications when used with available RTI automation devices. For more information, check out www.rticorp.com.

HANGING OUT—Ornithologist Dr. Karl Berg decided to install microphones inside the nests of the parrots he and his team have been studying at a research center in Venezuela. Berg turned to Shure’s SM57 and SM11 based on their reliable design and professional quality. The mics appear to be frog-friendly, as well.

In locations and time of year with bright sun, optimal viewing inside is still required. That’s where Samsung’s SL46B “super-high brightness” indoor display solution comes in.

Carolyn Heinze is a freelance writer/editor who has reported on audiovisual and IT trends for more than 15 years.