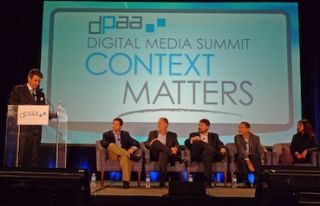 With an agenda as ambitious as what was on display Tuesday at the DPAA Digital Media Summit– Context Matters, at the New York Hilton– it would have been easy to get lost in the number of presentations, panels, and sessions to wade through. But Sue Danaher, president and CEO of the DPAA, and her DPAA team took the opportunity of this, the 5th annual Summit, to bring together a diverse group of professionals from all sides of the market for what is now the single most important conference exploring the state of digital place-based (DPb) advertising, and the Networks that provide those platforms.

Danaher kicked off the Summit with the admonition that as far as DPb has come, there is still much to do.

“A lot of ad buys are still directed to old silos,” said Danaher. But industry thinking is increasingly coming around, she pointed out, to the fact that media only exists in context. That all media is part of a continuum. And that DPB media is the heart of that continuum.

“DPb media meets the consumer at ‘Point of Purpose’”, said Danaher, and so it is well situated to provide unique scale & ubiquity.

Case in point: prior to the commencement of targeted sessions, panels, and presentations at the Summit, Mike DeFranza, president, Captivate Network, presented the first annual DPAA “Visionary Award” to Ted Turner. Turner was not able to be physically present to accept the award, as he was attending sessions at the United Nations in New York this week, but he addressed the DPAA Digital Media Summit via a videotaped message.

“When I got into satellite, I knew I was taking a risk,” said Turner in the video. “I Can’t believe how far the industry has come. I can say the CNN Airport Network channel is among my proudest achievement.”

“People are becoming more mobile,” Turner continued. “You guys are at cusp of something big,” he said, referring to the Summit attendees’ involvement in DPb media. “People who took chances at beginning of cable and satellite, succeeded. You can do the same.”

CNN’s Airport Network was one of the first DPb networks. And it does not just sell ads, but advertises other Turner networks. Other Turner-founded DPb networks include Accent health, College Television Network, Turner Inflight, and Autozone.

The Keynote at the Digital Media Summit was presented by Bob Liodice, president and CEO of the Association of National Advertisers (ANA). Fresh off his most successful conference in Florida, the Masters of Marketing ANA Annual Conference earlier this month, Liodice reported “Brands– are healthy.” Liodice outlined how, according to eMarketer, there will be 5% growth this year in media investment by brands. Nationally, media investment normally tracks GDP, but this year, it will be more, with Digital up 17%, Interactive TV up 17%, TV up 6%, and DPb 11% up over 2011.

Liodice pointed out that there is much work to do in measurement, and accountability. Traditionally, marketing was not trackable, but a variety of new developments are changing that. ANA is involved in the new Media Ratings Council. Also, ANA is calling for Brand-Specific Commercial Ratings– and Liodice pointed out that TV is not there yet. “You have to get TV right,” said Liodice, underlying the point that new metrics tools are impacting all media, not just DPb. The ANA is pushing “AD-ID” to create the UPC code for ads.

“In the ad arena, there is not common coding. With an investment of $40 per code, we could achieve an industry payoff of $2B,” said Liodice.

Sue Danaher, president and CEO of the DPAA, and her DPAA team took the opportunity of this, the 5th annual Summit, to bring together a diverse group of professionals from all sides of the market.

The success of the Digital Media Summit was having so many stakeholders in one room. And not just providers. In fact, unlike so many industry conferences where there’s too much preaching to the choir, it was not predominantly providers. The strength of the Digital Media Summit is based on the fact that it’s essentially and end-users conference. Brands, Agencies, and Networks were well represented Tuesday. A good example of this was the panel: “Digital Place-based Media – The Brand Marketer’s Perspective,” billed as “Marketers talking frankly about why they use DPb, the barriers to greater usage and how agencies, networks and other stakeholders can help overcome these barriers to deliver a more useful and impactful tool for their brand(s),” the discussion, moderated by David Verklin, Partner, VSV Partners (formerly CEO of Hal Riney, Carat & Canoe Ventures), was lively. Panelists were James Cordero, Senior Director, Marketing, Walmart; Pete Krainik, Founder and CEO, The CMO Club; Ben Pagel, Assistant Brand Manager, Energizer Personal Care; Steve Palmisano, Founder, AdElevate (formerly Sr. VP, Marketing Services, Pfizer Consumer Healthcare); and Kirti Srikant, AVP, Director of Brand Marketing & Advertising, Oppenheimer Funds.

Asked by moderator David Verklin, why is DPb media is held to a higher standard by CMO’s, for metrics and ROI, the panelists had some good insight.

Pete Krainik, Founder and CEO, The CMO Club commented that he did not think it’s a different standard, from the CMO’s perspective. ”I think it’s a problem of there being a blind spot as to what new medium will do,” said Karina.

Steve Palmisano, founder of AdElevate said that “it’s not an incredibly hard sell, but more things have to happen to make the case. ”

The theme of metrics in DPb was a constant thread throughout the Summit. There were comments by many speakers, audience members, and moderators about the broader question of the establishment of metrics for DPb, and specifically about the double standard whereby old media like TV can coast for decades providing thin metrics while new media and DOOH platforms in particular are raked over the coals on both audience metrics and ROI. This should hardly be a surprise. When so many DPb providers and analysts constantly advocate taking money from TV ad budgets and other “old media” and shifting that spend to DPb, it’s hardly reasonable to expect that the larger ad world would sit idly by or not in fact raise the metrics bar for the newcomers. Thankfully, pundits’ remarks so prevalent in recent years that “TV is dying” or “money is being yanked from TV and shifted to DPb” have abated this year. Hard to keep making those silly statements when all data shows that Ad spending in traditional TV is rising. At this Summit, and in the industry this year, the thinking is that DPb should be sold as fitting into a cross channel campaign, not pitched as an alternative to other buys.

In a different panel Tuesday, the “Town Hall Meeting: What Will it Take to Grow This Sector”, David Krupp, President, Kinetic, said “TV is not held to a high [metrics] standard. Why? Because they have never been. So even if there are no great metrics for TV, it’s been in the game so long, it’s proven.” Krupp also pointed out “There is so much data now, we don’t have to look at ‘metrics’ only. We can look at results.” In other words, sales lift is the best metric.

Lee Doyle, President, Client Development, Mindshare, also on the Town Hall Meeting panel, downplayed the Metrics hurdles in DPb. “Many clients are committed to all media, in all forms,” said Doyle. “We just need to do things like bring more case studies to light. But, sometimes it is still intuitive. If client likes it, you don’t always have to provide the metrics. In that respect, things are not that different.”

Despite its one-day format, the DPAA Digital Media Summit featured so many presentations, input from panelists and attendees, and case studies, that any report will leave out a variety of questions and issues that were raised Tuesday.