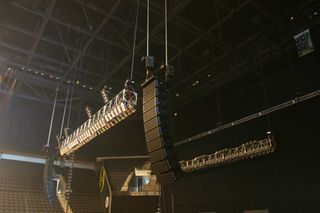 LYON sound system
“The LYON system was an eye-opening experience,” says Pauley, who mixed Brice on a LYON system at the University of Oregon’s Matthew Knight Arena. “It has remarkable clarity and projection, and it seemed like everything was jumping out of the arrays right at you.”

Pauley also noticed how the linear performance of LYON changed his mixing approach. "I found I could get a well-defined mix that sounded louder than its true SPL. Everything came together so well that I was surprised when I looked over at the SPL meter."

Relles’s purchase includes 14 LYON-M main and six LYON-W wide-coverage line array loudspeakers, adding to an arsenal that includes six 1100-LFC low-frequency control elements and a Galileo Callisto
loudspeaker management system. One of the traits that first drew George Relles to LYON was its even front-to-back coverage. “With some line arrays, as you get into the near field it doesn’t sound as good, so you have to cover it with front fills,” says Relles. “But with LYON, I was struck by how smooth it sounded when you got close. It was a marked difference from what I’ve heard from other systems.”