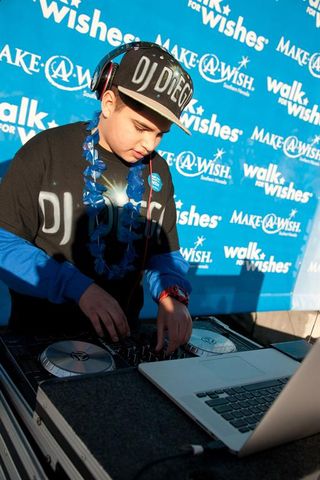 Guitar Center Professional (GC Pro), the outside sales division of Guitar Center that focuses on the needs of professional users, has regularly collaborated with Make-A-Wish Southern Nevada, a chapter of the national organization that grants the wishes of children diagnosed with life-threatening medical conditions in the United States and its territories, to provide access to musical instruments and professional audio equipment for children in the program. Most recently, the GC Pro office in Las Vegas worked with the southern Nevada chapter to make the dreams of two young DJs come true. In the cases of Kyle and Diego, two youngsters suffering from debilitating, life-threatening conditions, GC Pro fulfilled their wish list.

“These kids are amazing,” said John Stevens, the account manager at GC Pro’s Las Vegas office who acted as the liaison for the project and for other similar collaborations since June of 2013. “They’re up against some serious illnesses — Kyle is permanently in a wheelchair and Diego has a serious neurological condition. But they are both really focused on becoming DJs. We wanted them to have the tools to achieve those dreams.” And that’s exactly what’s happened — both kids are already using the gear to play shows and concerts in front of substantial crowds.

Miriam Ceballos, wish granting coordinator at Make-A-Wish Southern Nevada, had praise for GC Pro’s contributions to their cause. “We work with many vendors on these projects, and I can say that every time we’ve worked with GC Pro it’s been a pleasant and fulfilling experience, for us and for the kids,” she shared. “DJ wishes have become very popular lately, and GC Pro knows exactly what the kids want and need, and it’s always right there when you need it. Sometimes the kids know what they want, and whatever it is, you know GC Pro has it in stock. And if the kids aren’t sure, GC Pro is there to help them figure out what works best for them.”

John Stevens noted that working at GC Pro is always fulfilling because, he said, “Every day you’re making someone’s dream come true, to be an artist, an engineer, a producer, a DJ. But with Make-A-Wish, it takes that feeling to a whole new level. When you see the kids smile and light up when they get that equipment, it pulls at your heartstrings. It’s the best feeling I’ve ever gotten here at GC Pro.”