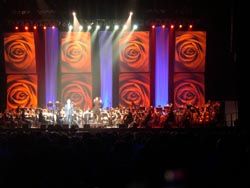 Creative Show Services used a lighting board to do all the blending for several screens at this show for Andrea Bocelli.
A popular trend for cityscapes recently is the projection of images onto buildings. In these locations concrete often makes the most ready screens. Late last year New York stagers Scharff Weisberg contributed to Doug Atkins' "Sleepwalkers" projection project at the Museum of Modern Art with five Christie Roadie 25K projectors. The project involved the projectors being synched with video that was projected onto the walls of the MOMA in five locations about the building.Looking back a few years to an application that was experimental for its day, at the 1996 Olympics in Atlanta, Staging Techniques constructed an "Infinite Theater," that included a projection of 70mm film projected onto the floor, which was the screen. All four walls were mirrors from the floor to about 32 feet up and the audience was all the way up on one wall looking down on the floor, where, with all the mirrors, the images reflected infinitely. The projectors had to be hung nose-down like sides of beef, which meant that the oil circulation had to be modified, and the horizontal lamphouses were actually running vertically. While modern technology has made such an installation much more possible, in '96 projectors weren't build for such uses, and this illustrates how experimental uses became commonplace, such as hanging projectors vertically.

For the release of a new "Need For Speed" game, Staging Techniques projected the game onto a local building, spanning 75 feet, and gave the contestants FM receivers to broadcast the game sound so participants could actually play the game off the building.
At a recent event for Rite Aid, stagers AVMG teamed with LMG to create a stunning display of vertical edge blending that had never been done before. Using Analog Way's DiVentix for the edge blending, and 10 projectors in two stacks of five to create two strips of images on either side of the stage. Two additionally stacked projectors cover the marquee over the stage. To help coordinate the timing, Dataton's WatchOut software was used, which allows for multiple outputs from a graphic source. The curvature of the two vertical screens presented the biggest calculation challenges. Shooting flat surfaces with projectors is easy, but LMG had to watch for image distortion on the curvature. For control, the crew chose Medialon, which had never been used so extensively with Analog Way's equipment. When done, the graphics ran seamlessly up the left side of the stage, across the top, and down the right side in a truly pioneering display.

At the Rite Aid show, LMG and AVMG used vertical edge blending to achieve a seamless stream of moving images over 12 projectors.
Audio Visual Innovations' staging division, Creative Show Services, did another innovative application. In a show for Andrea Bocelli, called "An Evening In South Florida," John Orchard, producer, and Bob Foley, lighting director, used the High End's Catalyst media server system to do all the blending for several screens. What was unique is that the system was run through a lighting controller on the fly, without programming. Orchard commented, "Everyone's pushing the limits, like using one projector to split images, and allowing control gear to project in crazy ways." Foley added, "Where I see it going is total immersion. Any 360-degree surfaces will be covered. How that could fit in a boardroom is an entire wall could be your light source and content provider."Analog Way...www.analogway.com
Christie...www.christiedigital.com
Dataton...www.dataton.com
High End...www.highend.com
Medialon...www.medialon.com