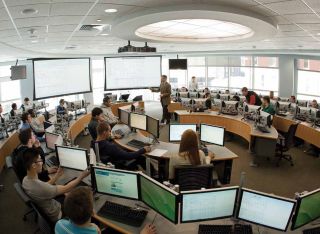 Alter Hall, the year-old, award-winning center of Temple’s Fox School of Business, is a showcase of the latest AV technologies that can be used in class or for distance learning. AMX controls direct audio, lighting, and visual signals from multiple peripherals to multiple screens via Extron routers. SonicFoundry Mediasite captures the content for storage and/or future webcasting.

If you’re an integrator who is thinking of “dropping out of school,” think again.

Short-throw and ultra-shortthrow projectors are helping to spur growth in both markets where interactive whiteboards are widely used. “As you move the projector close to the screen you eliminate shadows and light in the instructor’s eyes,” Glad said. “If you stand in front of a class for several hours and are blinded by a lamp, that hurts. At three feet you eliminate most of it, but at 14 inches you eliminate all of it, and these innovations in health and safety make it easier for audiences and instructors to interact in the classrooms.”

Three ultra-short throw models are offered by Hitachi: CP-A52 at 2,000, CP-A100 at 2,500, and CP-A200 at 3,000 lumens. “The 2,500-lumen was our first model, used for networking throughout campuses. But when the ultra-short throw models were installed there were problems because of angles, making it hard to get a straight image,” he added. The solution was Hitachi’s Perfect Fit function, allowing adjustment of the four corners of an image, one by one, so they fit the screen perfectly.

Hitachi developed standard and adjustable mounts with Peerless Industries for the ultra-short-throw, wall-mounted models, and also has a cart mount system. “Because of the possibilities that ultra-short throw projectors enable, we want to make sure that these models can be installed in virtually any configuration,” Glad said.

Hitachi short-throw and ultra-short-throw projectors are helping to spur growth in both K-12 and higher education markets where interactive whiteboards are widely used.

The advantage in higher education classrooms, typically with 40 to 50 students, is that there is no obstruction by fixtures such as sprinkler heads or fluorescent lights. If a podium is used at the front of the room, the lecturer won’t be blinded by light.

“For the short throw products, with less costly technology, we take out the mirror system, moving it back a foot-and-a-half,” Glad said. “We have the CP-D10, a 2000- lumen basic version for K-12 use and the CP-DW10N, a 2,000-lumen wide XGA model for smaller lecture halls. It takes up more space and has a wider aspect. The CP-DW10N is suited for higher education use; at 88 inches you’re not stretching to reach the top.”

Short throw projectors, he said, especially for K-12, eliminate installation problems because many times there are electrical outlets at the base of a wall, and if you mount a standard projector in the ceiling, you have to bring the power down. “On the wall, you just drop cable down and plug it in. There are some savings there; it saves time for the installer and money for the school.”

The higher education market is very competitive with many integrators competing for the work, said Mike Bohan, account rep for HB Communications in North Haven CT. “The hottest trend today is the presence of digital media in classrooms. More and more higher education facilities are dealing with instructors walking into classrooms with their laptops that only output in digital formats such as HDMI, DVI, or DisplayPort.”

As solution providers, integrators need to properly prepare to deal with the delivery and management of these systems, he said. “Constant education for ourselves as well as for out customers will be paramount in understanding this new digital age.”

Despite the budget crunch, there is a huge demand, nationwide, for classroom upgrades, said Tom Noack, marketing manager for Premier Mounts. “Most schools want and need interactive whiteboards and other teaching technology tools.”

Many school districts and states have bonds that are dedicated to technology use; they have to spend the money on technology. “There is E-Rate, a federal fund helping schools that have a high percentage of low-income students to develop their IT infrastructures, as well as No Child Left Behind and Title II initiatives,” he elaborated. “And in the higher education segment there is still a lot of money flowing through fundraising efforts and corporate sponsorships.”

Premier recently introduced two universal short throw projector wall mounts with audio components. “These products both offer a simple and cost-effective way to not only mount the projector, but also significantly enhance the sound in the classroom,” Noack said. “The UNI-STA+AUDIO and UNI-EXT+AUDIO both provide two speakers and a powerful 50-watt amplifier that attaches directly to the short-throw projector mount. Together, they offer flexible options for the latest short-throw projectors. A patentpending GearBox is integrated into the projector base plate and provides a convenient location to securely house various small electronic support devices, including the 50-watt amplifier.”

“These products offer a dramatic improvement to the audio that comes out of the projector,” he said. “The audio goes above the teacher’s head and fills the room with full, rich sound. Class sizes are increasing, so teachers have a harder time competing with noise. Many bring in speech reinforcement devices such as pendant mics. Our energy-efficient amplifier has a dedicated mic input to incorporate a wireless microphone as well as several additional inputs for other audio sources.”

As short-throw projectors decrease in price they will continue to replace traditional classroom projectors, Noack said. “All equipment will become smaller and lighter. Security will continue to be an issue and is on the priority list for many districts. Instead of putting equipment in racks, we offer the ability to have it tucked neatly away in our GearBox.”

Wall installation is significant for modernization, he said. “Now, you don’t have to be concerned about what type of ceiling is in each classroom, or even local codes for plenums and other headaches. Our attractive wall-installed projector mount includes cable management and offers a sturdy mounting strip integrated into the 54-inch wide base, giving installers a high degree of flexibility when installing our wall mounts. All of this combines to ease the cost of modernization for schools and districts.”

HB Communications is installing Crestron GLS Occupancy Sensors in 95 smart classrooms at Bryant University in Smithfield, RI. Each smart classroom has either touchpanel or push-button control.

“The trend in the higher education market is to be able to manage AV systems with as little additional assistance as possible,” said Mike Bohan of HB Communications. “In today’s market that’s what it’s all about. If these systems did not exist, schools would have to support AV systems with additional staff, and that would mean more bodies and would be more costly.”

“All ethernet-controlled classrooms are tied back to an enterprise control server which manages RoomView,” Bohan explained, “Where occupancy sensors are used, they look for motion, and can be adjusted to sense in-room activity for as short a time as 10 seconds or up to 30 minutes. If there is a class break between noon and two, for example, the sensor will tell the projector to turn off if no motion is detected. Room displays are globally turned off at 10:30 p.m. to save lamp life, and RoomView sends out a second command at 11 p.m. to shut off the entire room’s AV system to save energy.”

HB started the Bryant project in 2008, and has covered about half of the targeted classrooms to date, upgrading as the budget allows. “Ultimately, the goal is to have all fully managed rooms that include ceiling mounted projectors, custom podiums with integrated electronic equipment, and motorized projection screens.”

The university operator, media services specialist Jason Gregg, is the main operator on the system, teamed with director of academic computing media services Phil Lombardi and media services manager Roger Acosta. “Jason is a Crestron-trained part-time programmer and helped develop standards within the school such as a system help desk,” Bohan said. “If a teacher has a problem, they press a help button with four options for specific issues. That sends Jason a ping, and he can reply with an answer or deploy someone from his student staff to the room.” —KM

SchoolView streamlines control and automation of multiple technologies that previously were operated independently.

On March 17, the U.S. Department of Treasury and the Department of Education announced the $11 billion in allocation authority to issue qualified school construction bonds under the American Recovery and Reinvestment Act of 2009 (ARRA). Qualified school construction bonds can be used to finance the construction, rehabilitation or repair of a public school facility or for the acquisition of land where a school will be built. With the key role technology plays throughout most aspects of education today, its specification is critical in the planning and construction phase.

AMX has declared its immediate ability to play a key role in qualifying education projects for ARRA stimulus funding and the 2010 Construction Bond with its next-generation AMX SchoolView Solution. SchoolView streamlines control and automation of multiple technologies that previously were operated independently— such as classroom control, distributed audio, video on demand, digital signage, PA, bells, security cameras, and emergency alerts, and unifies them on a single platform. With it, teachers who may have been overwhelmed by the process of using multimedia to augment learning in the classroom, such as incorporating recorded lectures, software presentations and shared resources, only need the technical proficiency of touching a button.

SchoolView solution is also a boon for energy savings. It aligns to green-building initiatives that many school districts are facing as it automates management of energy-consuming resources like PCs and AV equipment, and further increases cost reductions by simplifying maintenance and support, which extends technology lifecycles.

“SchoolView has helped Round Rock ISD modernize traditional classroom technologies by using a single, networked platform,” commented Ed Zaiontz, Round Rock ISD director of information services and CoSN board of directors chairman. “By providing our teachers with an easy-to-use platform, it enabled us to upgrade the educational experience for our students. Teachers can now easily access and utilize a wider array of technology to enhance learning in the classroom.”