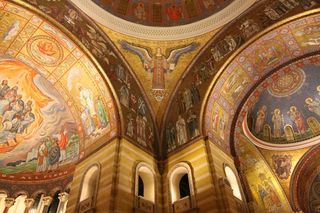 Completed in 1914, the Cathedral Basilica of Saint Louis is renowned for its breathtaking mosaic works - one of the largest in the world. Comprising more than 41.5 million pieces, and covering 83,000 square feet, the mosaics display took more than 75 years to complete.