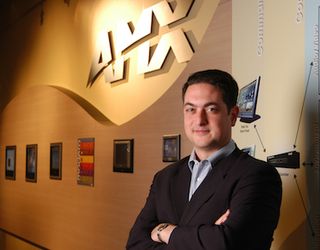 Having revitalized AMX’s fortunes by capturing a large share of touch panel and related product sales in the first part of his tenure—“We went from a $12 million market cap in 2005 to $350 million just four years later,” he said—Skaf then began AMX’s drive to acquire complementary businesses that would widen its product/services portfolios. In 2007, Skaf was named "Corporate CEO of the Year" by the Metroplex Technology Business Council of Dallas-Fort Worth.

While all this was happening, Skaf made AMX into a global company, by building an international network of distributors, sales offices and showrooms that could reach users all over the world. AMX first expanded to the UK and Europe, then to the Middle East, Northern Asia, Asia Pacific and India. Today, the company has representatives serving users in nearly 100 countries, plus showrooms and “Experience and Training Centers” that allow users to see and experience AMX solutions in real working settings. These facilities are open in Dallas, New York, London, France, Germany, the Netherlands, and Russia.

A key part of AMX’s success under Skaf is due to his outreach to end users, in order to motivate these buyers to select AMX products when they do upgrades directly, or hire AMX-affiliated systems integrators to do them on their behalf. A second element is his emphasis on partnering with these integrators to develop sales that benefit everyone: AMX itself, the integrators who install AMX products, and the end users who buy them.

“Originally, the integrators were pretty leery about AMX educating end users directly; they thought that we were trying to cut into their sales,” said Skaf. “But once they realized that our goal was merely to drive product preferences—with product education that actually motivated end users to seek out the help of expert integrators—then their attitudes began to change.”

Rashid Skaf was named Corporate CEO of the Year by the Metroplex Technology Business Council of Dallas-Fort Worth. That’s putting it mildly. “Rashid Skaf has contributed to the success of our members by developing innovative AV products, and educating our customers about these products,” said Chuck Wilson, executive director of the National Systems Contractors Association (NCSA). “Not only has AMX grown by virtue of his efforts, but our members’ businesses have grown and prospered as well.” To provide its integrator partners with real support, AMX has developed tools for them such as Device Discovery, VisualArchitect, and Rapid Project Maker (RPM). The company has also rolled out integrator-centric initiatives such as Pro Services, System Design Library, and its VIP Program. It has also launched AMX University, where integrators can earn technical accreditation as AMX Certified Experts and AMX Solutions Masters.

Of course, Skaf didn’t achieve AMX’s success on his own. He did it with the help and enthusiasm of his managers and employees. The basis for this support is Skaf’s emphasis on building a constructive, inclusive corporate culture: “He turned AMX into a place where people want to go to work,” Wilson said. Indeed, The Dallas Business Journal has officially recognized AMX as being one of Dallas-Fort Worth’s "Best Places to Work."

“I believe that a corporation is like and should be like a family,” Skaf explained. “This means building positive, supportive relationships, and that we can count on each other. There’s also room for all of us to ask questions and be held accountable—that includes me—and for all of us to work together as a team seeking the same goals for our mutual benefit. The guiding principle for all of us, as a family, is ‘don’t let me down.' ”

As the years have passed, Skaf has done his best to keep AMX’s product lines fresh, capable, and innovative. This is why “95 percent of the products we make now, we didn’t even make four years ago,” he said. “Change is constant in this industry, and we do our best to stay on top of it.”

One area where AMX has lead the way is in implementing network security protection into its IP-connected products. For instance, AMX’s NetLinx NX Controller Platform comes with a variety of features that are specifically focused on ensuring network security. AMX has added similar network security features to its Enova DGX Digital Media Switchers and Enova DVX Presentation Switchers, among others.

Rashid Skaf pictured with his family. Skaf "turned AMX into a place where people want to go to work," said Chuck Wilson, executive director, NSCA.
How good are AMX’s security measures? The company’s RMS software has been awarded two Certificates of Networthiness from the U.S. Army. It has also had its Enova DVX Conference Room Switching Solution listed on the U.S. Department of Defense’s Approved Products List, certifying that it is secure and reliable enough to be installed, used, and trusted in government and military facilities.

“We live in an age when major corporations such as Target and Home Depot are being hacked,” said Skaf. “AMX’s IP-enabled products are built to counter such attacks, and to protect the rest of the networked assets they are connected to.”

All told, Skaf has moved mountains in bringing AMX to the level of global success it enjoys today. This is why the company was acquired by the legendary audio/lighting equipment company Harman in May 2014. It was a strategic purchase that allowed Harman to substantially broaden its portfolio to offer a one-stop, completely full-service package of professional audio, video, lighting, and control solutions.

Rashid Skaf has nothing but good things to say about Harman’s integration of AMX into their firm, and the combined enterprises’ prospects for the future. But having helped the merger take place, he has decided to look for new challenges to conquer.

At press time, Skaf is enjoying a bit of down time after a decade spent growing AMX. But he'll be back. “I still like solving problems,” Skaf said. “I look forward to my next chance to do so either in a company that needs saving, or one that is profitable but looking to make a big step forward.”