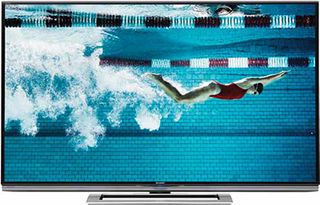 As the 4K Train Builds Buzz, Many Persistent Questions Remain

Sharp’s 70-inch Aquos LC-70UD1 Ultra HD LED LCD TV. At the 2014 International CES Show it appears that the spotlight will move from 3DTV to the Ultra High Definition (UltraHD, or UHD) video format, popularly known as 4K. After rolling out UHD at last year’s show, manufacturers have announced a slew of product releases for the New Year, supported by keynote speeches and conference tracks during the convention.

Look no further than Sony Electronics for an example of that focus. At a recent press briefing, company president Phil Molyneux stated, “We’re the only company in the world that allows you to shoot 4K content, edit it on our computers, and play it back on our 4K TVs via HDMI.”

But according to Steven Barlow, president of DVIG ear, “This is an example of where the technology is leading the applications. This is definitely not customer-driven.”

Having failed to gain traction with 3DTV, he said, display manufacturers are now putting all their chips on 4K. “They’re not making any profit on 1080p flat panels these days. If they can get in with 4K products and command a premium, even if it’s for only five or ten percent market share, they will.”

All of the UHD stakeholders—display panel, graphics card, and other technology manufacturers—need to invent the next big thing, said Barlow. “They’ve created a wave of products, of demand, of buzz, that will ultimately create new applications that customers will embrace.”

There is already a groundswell; computer manufacturers and software developers have been releasing 4K-capable products for some time, and companies such as Sony, with their RED cameras, have the ability to capture UHD content. But whatever the content, there are still technical hurdles where distribution and display are concerned.

Take cabling, for example. Some products offer only HDMI connections, and only support content at 24 frames per second or 30 fps. Other products interconnect using four HDMI cables (UltraHD offers four times the resolution of 1080p). The computer world has adopted DisplayPort 1.2 as an alternative; it, like the newer HDMI 2.0, transmits UHD at 60 Hz.

“There are quite a few consumer displays now that are supporting 4K in a single HDMI 1.4 cable,” reported Drew Taylor, director of sales and applications for Lightware Visual Engineering. “The computer we bought for tradeshows was $800, and it does 4K out of a single HDMI 1.4.”

Toshiba’s 65-inch 65L9300 Ultra HD LED LCD TV features up-conversion using a Cevo Quad-Dual core processing chip. Taylor believes the new Mac Pro will help drive 4K adoption. “For $3,000 you can have this screaming computer that will edit in 4K or beyond, and output beyond multiple 4K signals. And it’s becoming more and more cost effective to produce camera-shot production video in 4K.”

UltraHD requires a lot of bandwidth. “With 720p/1080i, the data rates were roughly 750 Mbps, uncompressed, for HDMI or DVI,” explained Barlow. “With 1080p it’s double—1.5 Gbps, per color, uncompressed. With 4K at 30 or 24 fps, it’s three Gbps per color. 4K at 60 fps is double again—six Gbps per color, or 18 Gb. Moving video signals at these rates is very challenging, particularly when you’re using HDMI, which is based on older coding techniques.”

Then there is the issue of the codecs, he said, which “form the basis for creating and displaying the content. I have a personal belief that the H.256 codec will become standard.”

“We have a transcode package that we call Media Flow,” said Larry Howard, director of sales at Alcorn McBride, a company that specializes in themed entertainment presentation and has partnered with Christie Digital, making use of that company’s 84-inch flat panels. “It can ingest a 4K file and split it up into four 1080p [streams] which then go to our four individual players. It can either be quad HDMI or quad SDI. We spit the 4K out on four individual outputs, put them into the four inputs, and it pulls it all back together.”

Content may be easier to come by these days, but there is an oft-overlooked cost, according to Howard. Content needs updating, and for UHD that can be expensive.

“When you roll the price of production into the first installation, that number can be massaged. So it may not be as apparent as it is in six months, when you want new 4K content and you find out it’s $180,000.”

Plus, Howard noted, CGI rendering is time-consuming: “With standard 1080p it’s done in 30 minutes, but 4K can be two days.”

In addition to themed entertainment venues, the applications for 4K are pretty much as expected, according to Steve Seminario, senior director of product marketing for Planar Systems, which offers an 84-inch 4K display, Planar UltraRes, in three versions, with a six-point touch option for each. “We’ve sold a lot into those markets that have 4K computer-generated data,” such as CAD, the oil and gas industry, power management, and governmental and military applications, he reported.

“We’ve sold a lot into conference rooms, board rooms, CEO’s offices, where they want to put up multiple sources at the same time. PowerPoint looks beautiful on one of these things. We’ve gotten less traction on high-end digital signage.”

The price of a single 84-inch 4K screen is roughly equivalent to four 1080p displays, but has no bezel cross in the middle, Seminario also noted.

“On the professional side, we have even more reason why our customers really need 4K, as opposed to somebody at home. So we’re really anticipating a pretty aggressive move where the common resolution becomes 4K,” he added.

UHD display costs are already falling, with Seiki offering 4K screens at comparable prices to HD equivalents. “I think most of the manufacturers are trying to keep the price at a premium,” said Barlow. “Initially the announcements were for 84 inches for $20,000; I think there are now a lot of products in the $3,000 to $4,000 range.”

There is general agreement that the way for AV integrators and consultants to get a piece of the 4K action is to educate themselves and become a go-to source for their customers. “A lot of the question marks come when I’m talking to some AV integrators,” said Seminario. “How do I drive this? Can I do 4K at 30 Hz over a single HDMI 1.4, or do I need an Nvidia K5000 with four outputs?

“If I were an AV integrator I would get on top of that so that I could really explain it to my customers. 4K is not necessary for all applications, but it really is useful for a lot of applications, and there’s a lot of opportunity for the expert, and to be the advisor.”

AV professionals owe it to their customers to be informed, said Barlow. “If you’re not designing in the capability to support 4K resolution, what do you tell the customer 12 months from now when he asks, ‘Can I do this’? Part of our role is selling solutions, and you can’t sell a solution without providing some educational component. Technology changes, and sometimes it doesn’t wait for you to accept it. Our goal is to try and provide clear technical facts and provide people with product choices that support these evolutions.”

Steve Harvey (sharvey.prosound@gmail.com) has been west coast editor for Pro Sound News since 2000 and also contributes to TVTechnology, Pro Audio Review, and other NewBay titles. He has over 30 years of hands-on experience with a wide range of audio production technologies.

Even though 4K is just arriving, we’re already hearing about 8K. SCN asked manufactures about whether customers will “wait and see” before diving into 4K, and what integrators should tell 4K customers that ask about 8K. Here’s what they had to say:

A conversation with an end user should center on his or her specific need or desire for high resolution. Simply due to the massive bandwidth requirements, 8K is an enormous leap in technology that will be slow to evolve. “More is better” doesn’t necessarily apply in this debate, so the customer needs to be educated about the pros and cons of 8K versus 4K, or even HD. Once the added cost is eliminated as a factor, the integrator needs to delve into the source materials and the installation environment. Today, since there are no sources available for generating those resolutions, a customer cannot actually realize the benefits of installing an 8K system. Even more important is the fact that we don’t even know what signal type or connection type will be employed. Too much about the technology is unknown right now for an integrator to guide a customer to a credible solution.
—Andy Fliss, Marketing Director, TVOne

4K is a reality. It’s here and our customers are using it today. 8K is an unknown from an implementation and wiring perspective, and there’s no standard connection that can provide 8K. The big caveat for our industry to consider is the cost of production, both for 4K and 8K. Because of our scalable solutions, we’re ready for 8K.”
—Larry Howard, Director of Sales, Alcorn McBride

When image quality matters, you want the highest available resolution. We all remember the tremendous push to deliver HD to replace SD, starting at the high end and quickly becoming the de facto standard for projects small and large. In particular, the medical and imaging markets demand the best possible image, so the demand will be strongest there. Widespread adoption of 4K content for broadcast and commercially produced content is still a ways off, and 8K will be even further as standards and bandwidth are simply not going to be ready.
—Tom Barnett, Director of Residential Marketing, Crestron

While I would fully imagine that the homeowner will be slow to adopt the 4K evolution, at Atlona, we are seeing incredible traction within targeted verticals on the commercial side who are fully embracing the technology. Why? Because their businesses depend on the most advanced resolutions to be effective within their respective industries. Visualization centers, medical facilities, and command centers all utilize the highest possible resolutions for business critical decisions and research. They do not have the luxury to “wait” for 8K.
—Michael DiBella, Marketing Communications Manager, Atlona

Recently, use of 84-inch diagonal 4K commercial displays has ramped up to become quite mainstream. This is not a surprise to anyone who’s seen the large demand for small video walls—like 2x2 of 46-inch or 55-inch super narrow bezel LCD—over the past five years. In a single large 4K display, users get a seamless solution sized perfectly for many collaboration rooms and offering a stellar image even at up-close touch distances.
—Steve Seminario, senior director of product marketing, Planar Systems

The four-fold leap in resolution means that, for now, capturing, storing, and distributing 8K content requires a significant investment. Integrators should therefore tell [customers] to wait and see: Wait until a true standard for 8K is implemented, and then, see if their audiences can actually tell they’re seeing more pixels. Considering the pace of technology, the only thing certain about 8K is that, by the time it becomes standard, everyone will probably be talking about 16K!
—Mike Garrido, Senior Product Manager, Business Products, Christie