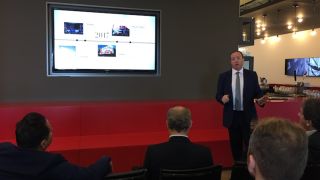 Ocean Outdoor's Tim Bleakley presents to DPAA attendees “We are influencing the whole industry and the top guys in the ad market,” Frey said. “And the more we spend time with these guys, the more we get them excited about the digital properties of out of home, the more all the businesses grow.”

After providing a recap of the association’s events of the week, Frey introduced the session’s guest speaker, Ocean Outdoor’s CEO Tim Bleakley. Starting with an assessment of the global industry—including the assertion that “digital out of home is one of the last bastions of long-term branding”—Bleakley went on to present about a recently completed, high-profile project by his company: the replacement of the iconic advertising boards in London’s Piccadilly Circus, known as the Piccadilly Lights.

“Our vision for Piccadilly Lights was do reaffirm its legacy but bring the location into the 21st century, and create new opportunities to amplify the scale of the brands and deliver state-of-the-art innovation,” Bleakley said. “Instead of being a sort of ‘nice-to-have,’ it’s going to become an amplifier for what those brands do globally with their campaigns.”

The project, which was completed in late October of this year, involved the replacement of the tourist destination’s multiple advertising boards with a single Daktronics direct-view LED wall. This involved challenges such as convincing brands that held coveted space on the old boards of the merits of the new, dynamic layout—such as each of the advertisers’ opportunity to take over the entire wall for 30-second periods.

Overall, Bleakley said the power of the project (and of the digital out-of-home industry in general) is the novelty of its magnitude. “It is about impact and scale,” he said. “You can take something that’s been done before, and do it on a giant scale, and everyone goes ‘Wow, I’ve never seen that before.’”

After the presentations and before adjourning, attendees had the chance again to share ideas with old acquaintances and form new bonds—part of what Frey described in his introduction as the mission of the DPAA.