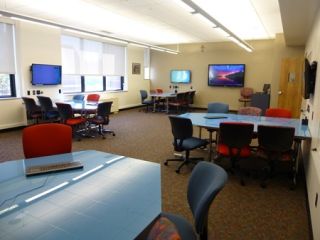 Ten years ago, the media services group at Duquesne University in Pittsburgh, Pa., elected to oversee all of its AV design and integration work in-house. Why? The group felt that they could do things better, and less expensively, than an integration firm.

“We had a local vendor that we were contracting to do work, but we noticed that every room they did for us was slightly different, with extraneous equipment we didn’t need,” explained Lauren Turin, manager of media services at Duquesne. “The department put its heads together and said, ‘wait a second, we do it better, we can do this in-house, and we can keep the costs much lower. And we’re here to support it on a daily basis––we have ownership of what we do, and we understand the systems.”

It also reduces the number of hours Duquesne’s media services team spends on training. “We’ve had integrators do rooms [in the past], and they put all the bells and whistles that they read about and that they think that people may want,” Turin said. “Our rooms don’t have bells and whistles; the integrity of the equipment is solid and the design of the room is simple.” An instructor who was worked in one room can easily work in another one, because of this simplicity. “The design shouldn’t really be all about the technology, it should be all about teaching and conveying your content.”

Greg Brown, CTS/D-I, is lead technician in the classroom design and maintenance group at UCLA in Los Angeles, Calif. The group oversees AV in-house for approximately 200 of the General Assignment Classrooms (GACs) on campus, while individual departments have the autonomy to decide whether they will use Brown’s group to conduct AV design and installation in-house, or if they will opt to work with an outside firm. Brown, who has been at UCLA for 18 years, relays that his group has been doing AV in-house since its inception over 30 years ago––it was really the only option back then. But even these days, like Turin, Brown finds that doing AV in-house enables tech teams to deploy better systems at a much better price.

“You know your situation better than an outside integrator does,” Brown said. “You do have to develop the specialties to do integration, but you only have to learn higher ed, and you can specialize in your campus.” Integrators, on the other hand, aren’t necessarily specialized in servicing higher ed exclusively, and even if they are, every campus’ needs are different. “And integrators like to do stuff the way they did stuff on the last project because maybe it worked, and that may or may not be right for a different campus. And they also like to use particular makes and models of equipment depending on what they can make the most money off of.”

Brown also argues that doing AV in-house can be faster. He relays that at UCLA, his five-person team was able to integrate systems during the school year without having to take classrooms offline, simply because they arranged with the registrar’s office to reserve a couple of hours on certain days before classes started, during which they were able to access the rooms and get some real work done. They also organized their deployments so that they could assemble components in their shop, which not only kept things moving even when they couldn’t gain access to classrooms, it also sped up installation when they could. “That’s another huge advantage you have in-house––you can run out and do all your support-type stuff first thing in the morning, but then come 10:00, 11:00, when the rooms are full and you can’t get out and do anything, you can work on building classrooms in the shop. You can do things in blocks of time that are not usable to an integrator because you’re in-house all the time,” he said. “It’s a great way to utilize people like your lower-level techs or even student technicians for doing things like making cable assemblies or putting equipment in racks. If you have it documented, you can break down the process into very easily digestible steps.” At one point, Brown and his team were building six rooms a quarter during the school year.

That said, Brown advises those who are just getting into doing AV in-house to start slow. “Plan small. Build a couple of rooms out over the summer,” he said. “Give some serious thought to what you want to do and try and come up with a system or design that you can leverage over a number of rooms for a number of years.” Standardization, he adds, is big.

Duquesne’s media services group consists of Turin, Educational Technology Engineer Todd Hughes (who heads up systems design), and three other colleagues. Turin, who has been at Duquesne for 12 years, says that succeeding at doing AV in-house depends largely on who you hire. When recruiting, she seeks those who are eager to explore all of the options available to them (rather than those who like to do things “because that’s how we’ve always done it”), and who aren’t afraid of applying some MacGyver flair when coming up with solutions. “We’ve put together some really cool projects here just because the fellows in this department are intelligent and creative and want to push the limits,” she said. All the same, technology is not the end game: “We’ve had people apply that have Masters in Education and say, ‘I can implement technology into the curriculum.’ That’s not what we’re looking for. We’re looking for somebody who knows how to terminate cable, and knows about signal flow, and can see the big picture.”

One of the assets that Hughes brings to the table at Duquesne is the 20 years of teaching experience he has under his belt. He says this helps set the tone for conversations with faculty about what they need and want from the systems he’s designing. “They tend to relate and talk to me on a peer level,” he said.

If you’re making the transition to doing AV in-house, Brown emphasizes the need for training. He says that while having someone on staff with a CTS-D certification definitely helps with design, the CTS-I certification is a must if you want your installations to be safe. “A bad contrast ratio is not going to kill anybody,” he said. “But if you are going to start hanging stuff, or mounting things, you’ve got to know what you’re doing.” At UCLA, Brown’s team has the support of the facilities staff to take care of hanging and mounting larger components.

It’s also important to have the support of the upper administration, Turin notes. “They didn’t know how much money we’d been saving over the years, and we have since showed them a lot of cost savings,” she said.

For those seriously considering bringing all, or some, AV design and integration work in-house, Brown suggests turning to your peers. “Find somebody who is already doing it and learn from them,” he said. He recounts that he’s received tech managers from other schools who have simply spent the day observing how the team at UCLA works. “Have an appreciation for how much stuff you don’t know, and just find ways to soak in as much as you can.”