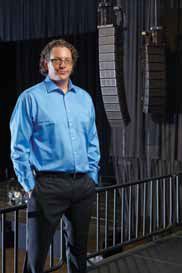 From a word association standpoint, when the phrase “user interface” arises, there is a tendency to think about control. Whether mechanical, digital, or some combination of those two elements, a user interface is where people push buttons.

So what is the user interface of a loudspeaker? This was the question that guided Meyer Sound in the development of its first new flagship system in a decade, the LEO, released last year. It was brought to market with rigging (mechanical) and Compass software (that would be digital) built to interact well with humans.

LEO was embraced in the field, and Meyer Sound, being a company that spends a lot of time in the field with customers, took a few notes on other places and situations where users might like to see its new linear line array technology applied.

Meyer Sound’s product development is informed by customer feedback from the field. “We’ve taken in a lot of user feedback over the last few years,” explained Luke Jenks, who served as director of European technical support for almost nine years before taking on the role of product manager for Meyer Sound in 2010. “We’ve really taken to heart that people want from us the easiest experience and most efficient ways to design. So there’s a company effort behind all of our products—it’s not just about making loudspeakers anymore, it’s DSP, rigging, software control, and all the things that go with it.”

Particularly in the realm of commercial audio installations, where speakers are placed and then the designers and installers situate themselves in front of their laptops, with analyzers and DSP configurators, and tune to their hearts’ content. “Their relationship to the product is happening through their computer and their ears, the peripherals are really the window,” Jenks observed. “That’s why from DSP to rigging, all these things are just as important as the speaker.”

But don’t worry, Meyer still put just a little bit of emphasis on the speaker with LEO, and now it has once again applied user feedback to product development by extending that linear line array technology into a new package built for commercial audio applications. Making its debut at the ISE show last month in Amsterdam, the self-powered LYON linear sound reinforcement system incorporates the technology of LEO in a lighter and more compact package.

(Left to right:) Meyer Sound’s chief loudspeaker designer and VP of R&D Pablo Espinosa, company co-founder and CEO John Meyer, and product manager Luke Jenks. Now the linear listening experience comes to new, permanent applications, and audio designers will love it. LYON is available in two versions: the LYON-M main line array loudspeaker and the LYON-W wide-coverage line array loudspeaker. Complemented of course by the carefully curated peripherals of the 1100-LFC low-frequency control element and the Galileo Callisto loudspeaker management system, the LYON-M is the anchor and the LYON-W fills in all the details. Oh, and both can be used to provide supplemental coverage in a LEO system.

Linear advantages are becoming more critical in commercial installations where big-budget production on sponsor-related audio content requires top-level playback. Linear technology brings the scalability of studio recording to the large scale of a stadium, arena, or anyplace where intelligibility matters.

“Meyer has always been the company that places an emphasis on low distortion,” Jenks explained. Back in the ’80s, ’90s, and early 2000s, the word on the street was that Meyer was good for opera and Broadway, but not rock and roll. “At that time, people wanted speakers to have a certain sound when they drove them really hard. Some people wouldn’t want to use a super clean system for super dirty bands.”

The self-powered LYON linear sound reinforcement system incorporates the technology of LEO in a lighter and more compact package. But now that we’re in the digital era, many of the characteristics of sound are determined upstream, so the relative neutrality of linear playback presents advantages in maintaining the intentions of the content producers. This may prove especially beneficial in today’s commercial audio installations. “Quite often, there’s nobody mixing a commercial install,” Jenks pointed out. “This way, the work that’s done in the studio can be brought to commercial installs.”

One of the points of pride related to the release of LEO, Jenks elaborated, was that it was “a step forward for us in a lot of ways, especially in terms of power and being able to maintain the linearity and neutrality all the way up to its limit.” LYON may offer that technological prowess in a more diminutive package, but these days, technology being what it is, smaller doesn’t mean less. “It’s still a substantial system, it has to be to work along with our LEO system,” he said. “Our customers wanted to see LEO in a package that applied to them, so we gave them LYON.”

In terms of physical mass, there is a notable difference, and that may be a better fit for installations with weight limitations. The LEO-M weighs in at 265 pounds, and the LYON-M tips the scales at 195 pounds. That’s a lot of loudspeaker with “a significant weight advantage over [another compact Meyer offering] MILO,” Jenks pointed out, adding that it’s not the weight of the individual components that matters, it’s what you get in one box in a total system. “Weight is important to almost any install or production. It’s the total weight of the system that matters to us, and that’s where we hope we can provide an economical advantage.”