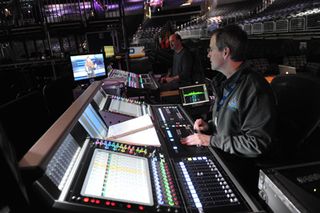 At the MusiCares event the Friday night preceding the GRAMMYs, engineer George Squires manned a DiGiCo SD7 with four DigiRacks at monitors to provide 170 inputs to 28 stereo ear mixes and 30 wedge mixes. Delicate Productions handled the audio production. On the 85th installation of the prestigious Academy Awards, ATK provided audio production with a Peterson-designed system comprised of three SD Racks, an SD5 at FOH helmed by Pat Baltzel and an SD10 run by Mike Parker. Hi-Tech Audio provided console support for all these events.

The GRAMMY and Oscar systems were both designed by ATK’s FOH Tech Jeff Peterson. On the GRAMMY event, Peterson also served as the system tech with assistance from Andrew “Fletch” Fletcher. The GRAMMY audio team again included consultant Ron Reaves mixing all of the live performance elements at FOH on an SD7, and ATK’s VP of Special Events Mikael Stewart on an SD5 managing all the nonmusical production assets. At stage right (“A”) and left (“B”), respectively, Tom Pesa and Mike Parker facilitated artist monitor mixes using a pair of SD7s (with an additional ”guest” rig used for sets by Justin Timberlake and Bruno Mars).

“Overall, we have a total of 276 mic preamps and 176 outputs distributed between five consoles and 11 DiGiCo SD Racks,” said Peterson. “Those four consoles, plus eight SD Racks, are on one optical loop, each connected to one of ATK’s 56-pair splitters. The guest monitor SD7 console is on its own optical loop, with three more SD racks. Also new is JBL’s newest line array, the Pro VTX V25 3-way system (powered by Crown ITech 1200 HD amps).

“In addition, we have more than 50 wireless microphones this year,” he adds, “which take up an entire splitter. We have almost an entire splitter dedicated to what we call high-level items, which are things like playback from the truck, Pro Tools lines, all of the production elements, and the podium mics (that are not for use with a band) are down the fourth splitter. The first two splitters are dedicated just for band inputs, one for stage right and one for stage left. This year we’re using AES outputs directly from SD racks in three locations to drive the amplifiers to the PA system. So it’s a whole digital system path again. What we eliminated was a second optical loop just to do the amplifiers. So everything is on one optical loop, with the SD Racks and the consoles.”

The transformer splits themselves are where the copper stops, Peterson explains, and are the dividing line between the live PA side with the DiGiCo SD racks and the trucks. From the ATK splitters, the signals go on to all of the different head amps: one to the two recording M3/Music Mix Mobile trucks, one to the main Denali broadcast truck, and one to the head amps for the DiGiCo consoles. “From there, it’s all various flavors of fiber, whether it’s Optocore to us or MADI to the M3 truck, or Hydra to the Denali. Once it leaves the transformer split, it’s pre-amped and converted to digital from there on. So the inputs come from the stage and then they are split up and sent to multiple destinations. The broadcast truck gets all of the raw microphones the same way we do. They do their mix, package it together with the broadcast items, the show elements and the production elements and send it out for broadcast. They also generate a lot of signals that we take out here: all of the videotaped packages, all of the music play-ons and play-offs, any band’s Pro Tools backing tracks—all of those are generated and routed from the truck through another splitter system to the rest of our consoles.”

“The SD system worked flawlessly,” said FOH production mixer Mikael Stewart. “The flexibility of the SD5 and SD7 are exactly what is needed for a show like the GRAMMY Awards.”

“I have continued my love affair with the DiGiCo console,” adds Ron Reaves, “having done quite a few gigs this last year on both the SD10 and the SD7. We started using these last year, and decided that this is all we wanted to use moving forward. This year, both monitor mixers switched from SD10s to SD7s, and that worked out great. The SD7 continues to be the best tool for my particular job at the GRAMMYs, and helped contribute to another great-sounding show out at FOH. I've particularly enjoyed the new dynamics package, and feel that between the new de-essers, and the dynamic EQ, that there's no vocal ‘problem’ that can't be tamed with this console.

“This year, there was a bit of extra pressure put on us at FOH to get mixes together faster in soundcheck,” Ron continues. “The demand has grown to have the first pass of a song be as close to the full band sound as possible and the console has helped me to accomplish this with the use of presets. I use a lot of presets and pre-dial pretty much everything so I’m never starting from scratch when we start rehearsing a band. That’s been a very helpful tool to have. The addition of the “presentation performances,” where a performer does a song and then introduces another performer, was also tricky and another place where the console excelled. I wrote separate snapshots in order to switch between these segments instantaneously and that worked great. For example, Hunter Hayes performed out on that dish stage in the middle of the audience. When he finished, he immediately introduced Carrie Underwood—and bang, snapshot change. The console did what we hoped it would do with no glitches in the audio. In the time it took the audience to applaud, the console had already switched and we were ready to rock on the next act. It was really cool. That was a great example of how quickly this console can switch snapshots and turn on a dime.”

After two years of working on a DiGiCo SD10, the process of building snapshots was made much easier for engineer Tom Pesa, who handled the inner monitor workings on an SD7 this year on the A-Stage at stage right. “It begins with a strong template,” he explains, “a snapshot that is laid out to accommodate anything that comes down the pike with 10 A-stage acts to soundcheck. The common functionality between the DiGiCo platforms means that session structuring, labeling, grouping, building macros, etc., is all very familiar. I had only two days to dive into my SD7 on-site and plan a basic template based on the volumes of band info. Each act provided input lists, band plots, monitor layouts and in-ear requirements. Once my fellow monitor crew created the plan on monitor wedge quantities and in-ear assignments, I added that info to the input list to create the snapshot for that band. Each act is so different when it comes to instrumentation, microphone type, mono mixes and stereo mixes, but the ability to truly customize each snapshot with every parameter being specific to that act means that almost any request can be satisfied. If time permits I try and get ahead of the game by focusing on individual processing for each input, high-passing, EQ and compression as well as FX presets and mix content. The availability of powerful processing onboard the SD7, including the dynamic EQ and multiband compression, allows me to keep things well contained and sonically tight, which is important, especially when creating smooth, coherent in-ear mixes. There is no doubt how good the dynamic range is with the new generation of DiGiCo consoles. I knew how good mixes sounded on SD10 and the SD7 continues this experience for me, just on a much larger and customizable platform.

“Once again this year at GRAMMYs, the entire FOH and monitor consoles were on an Optocore loop utilizing shared head amps. Monitors were in charge of band input gain and FOH was in charge of RF vocal and production mics as well as Pro Tools inputs. We have worked hard the last two years to create a system of trust when trimming each other’s gain while soundchecking, and it has worked well. Once everyone is happy with where the individual inputs of gain are, we switch to digital trim and can fine-tune our own inputs and not affect anyone else. This whole symbiotic relationship of all the mixers at the GRAMMY Awards is why session saving, snapshot updating and recall scope is so important, and all of us have done well in making sure everything is as it should be through soundchecks, dress rehearsal and show. All in all, the use of the DiGiCo systems at GRAMMYs continues to be a leap forward in how everyone’s mixes sound and the sheer utility of how they create those mixes.”