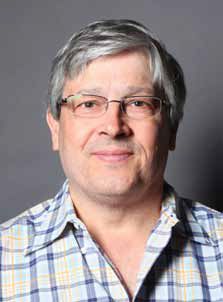 NAME: Gordon Kapes
TITLE: President and Owner
COMPANY: Studio Technologies
OVERTIME: A broadcast engineering buff at heart, Kapes had early success in telecommunications products. But by the mid-1990s, he returned to broadcast and audio markets, which continue to sustain his business today.

SCN: What is your first audio gear memory?

Gordon Kapes: I was fortunate to be part of an informal “apprentice” program while I was in high school during the 1970s in the Chicago suburbs. It was run by a wonderful engineer, craftsman, writer, and all around Renaissance man. The program was based in his basement and included an unbelievable collection of tools, test equipment, parts, and a small recording/ editing studio (there was even a Thompson submachine gun, which was safely locked up of course). Before I was old enough to drive I was borrowing Ampex 300 and 350 tape machines, along with Neumann and AKG mics to record our high school musical productions. We had a really strong theater program so the recordings were a pleasure to make. Included in my reel-to-reel tape library are recordings of fellow students including Darin Altay, who a few years later played Evita on Broadway, Jeff Perry, a fine actor and co-founder of Chicago’s Steppenwolf Theater, and Gary Sinise, who also co-founded Steppenwolf as well as achieving a significant acting career. On occasion during those high school years I sang, danced, and acted—something that quickly pointed me in the direction of engineering!

Kapes with his first computer, a RadioShack TRS-80. SCN: While earning your EE at the University of Rochester in the 1970s, you worked as the chief engineer of the university radio station and also served as a tech for the Eastman School of Music’s recording studio complex. What influence did this immersion in broadcast and recording have on your later career?

GK: For me, working on the technical staff at the college radio station was like finding a great new sweater or baseball glove. It just felt right and was something that I really enjoyed being around. Being elected to the position of chief engineer also encouraged me to obtain my FCC first class radiotelephone license. That was a big deal at the time and paved the way for me to land my first job at WBBM -TV, the CB S TV “O&O” in Chicago.

Being a part-time tech at the Eastman School (part of the University of Rochester) solidified how much I enjoyed being around great music and top musicians. Just to walk around and keep ones ears open, passing performance spaces and practice rooms, exposed you to how good the top players really are. It also showed how hard they had to practice to get, and stay, at that level. And this was prime time for recording facilities when there were big studio spaces, control rooms with tinted glass and mood lighting, large analog consoles, and two-inch tape rolling 16- or 24-tracks. Technology has made great progress since then, but it sure isn’t the same…

SCN: Your work in broadcast continued while you earned a Masters of Management at the Kellogg School at Northwestern University in 1983. But then invention took over—what was the first product you developed and released?

GK: During graduate school I released a simple back-up device (a “power failure transfer unit”) that was installed with PBX telephone systems. I designed the circuits, laid out the printed circuit board with crepe tape and soldered in the parts. I was very fortunate because this was an emerging market and my rudimentary product features and marketing efforts were effective. I was soon shipping my simple but reliable and effective equipment all over the U.S. and Canada. By the time I moved to commercial office space about a year later, I had taken over most of my parents’ house with parts, benches, and finished equipment! And I guess my choice of a first product had “legs” as variations and enhancements of that original idea were kept in our product line until earlier this year.

Kapes with a 1973 lighting board setup. SCN: Your company, Gordon Kapes, Inc., designed and produced telecom products for two decades. But simultaneously, in the mid- 1980s you purchased Studio Technologies from your mentor Jim Cunningham. How were you able to maintain such a prolific pace of product development in two different fields?

GK: With the success of my telecommunications products, it was natural for me to focus on that area. I still really liked audio, broadcast, and recording, but as my late father-in-law used to say, “You have to go where the work is,” and for me that was telecom. But I would typically always have one or two audio products under development to satisfy that interest. By the mid-1990s I realized that the lure of broadcast and audio was not going to go away. So that’s when the transition to being more serious about broadcast and related markets and away from telecom began; really just getting back to my “true love” again. (Don’t tell my wife…) From audio to intercom, and then to digital video and fiber optics—I’ve sure had fun over the past few years!

SCN: How are Studio Technologies customers from the commercial AV integration side of the business influencing your product design today?

GK: Over the past couple of years we’ve established a nice rapport with a number of consultants, systems designers, and installation companies. They have really exposed me to needs not being supported and overall how interconnected so many of the contemporary projects are. I’m not sure there are any new designs being done now where networking or maybe more aptly inter-networking of systems isn’t a core part of a design. We’re a small firm, but from years of being in the business, we have lots of unique skills and insights and the industry is starting to recognize that. We can work fast and, as “product guys,” love taking on new challenges. I think we’ve established a nice niche in supporting projects, big and small, with unique solutions. I think we’ll continue to succeed if our products can play an important role in letting users get the most out of their facilities and systems.