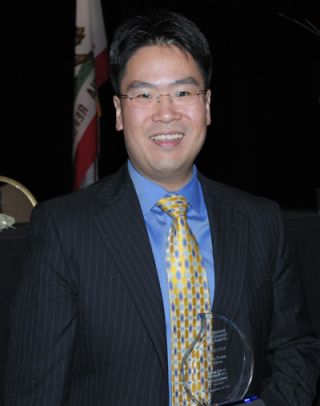 Jerry Huang, VIZIO’s vice president of Legal Affairs, was awarded the ‘Rising Star Award’ by the Orange County Business Journal at its Third Annual General Counsel Awards ceremony on September 19th. The award ceremony is designed to acknowledge General Counsels who have made significant contributions to the success of their companies and to the profession.

Jerry Huang, Vice President of Legal Affairs, VIZIO
"Jerry Huang has been an integral part of the team at VIZIO, one of Orange County's great entrepreneurial success stories, challenging some of the biggest consumer brands in the world and succeeding,” said Richard Reisman, Orange County Business Journal Publisher.

Five winners were selected out of 33 nominations, and were awarded in three categories including ‘Public Company,’ ‘Private Company’ and ‘Rising Star.’ Jerry was awarded the ‘Rising Star Award’ for his achievements, leadership, ethical standards, and contributions to the Orange County community.

“We are proud of the milestones Jerry has reached for VIZIO and thrilled that these accomplishments are being recognized by his peers and the business community,” said Rob Brinkman, VIZIO Chief Administrative Officer. “Jerry’s continued efforts are vital for VIZIO’s success and we are grateful to have him on our team.”