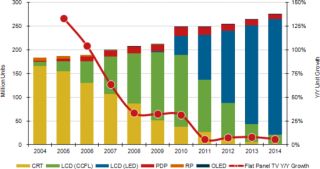 LCD TV shipments will rise from 206M units in 2011 to 225M units in 2012, an increase of 9%. LCD will account for more than 82% of all global TV shipments in 2011, rising to more than 88% in 2012, as demand for plasma falls and OLED TVs arrive late in the year in small quantities and at high prices. LCD is now a strong competitive technology at all sizes and should climb to more than 95% share by 2014 as CRT fades and OLED is slow to grow.

Premium features continue to grow, like LED backlights and 3D, and are keeping LCD TV average prices very stable, falling just 6% Y/Y on a volume weighted basis in 2011, the slowest year of LCD TV price erosion yet. Price erosion will be about the same in 2012 before picking up to 7-8% per year through 2015, but much less than the 24% decline seen in 2009. However, with the slower ASP erosion, total LCD TV revenue growth should remain positive through 2013 at 1-3% per year. The share of LED backlights in LCD TV shipments is expected to be about 46% in 2011, rising to nearly 68% in 2012. 3D will account for around 3% of LCD TV units this year.

Plasma TV units grew 30% in 2010 due to a favorable pricing advantage over LCD, but as that advantage has narrowed in 2011, shipments are expected to fall 11%, to 16.3 million units. The decline in unit growth and weak profits have led manufacturers to focus on more profitable segments, even at the expense of unit growth. As a result, plasma TV shipments are projected to fall to less than 10 million units by 2015.

The first OLED TV shipments are expected in the second half of 2012, but due to prices that are expected to be well above $4000 initially and remain significantly higher than mainstream high-end LCD TVs, will only grow to about 2.5% of the 40”+ segment by 2015.

The worldwide forecast for 3D TVs was slightly increased to more than 23M units in 2011 through better than expected growth in emerging markets and Europe. By contrast, demand in North America has been surprisingly soft for 3D, and may only reach 3.6 million units in 2011 as US consumers remain very price sensitive. Eventually though, North America will see a rise in 3D adoption due to stronger preference for 40”+ sizes where the 3D feature is common and expected to be less costly. Globally, 3D TV is expected rise to more than 100M units shipped by 2015.

Emerging regions, which includes China, Asia Pacific, Latin America, Eastern Europe, and Middle East / Africa, will account for the majority of flat panel TV growth over the next four years, averaging 11% growth each year, while developed regions decline an average of 1% each year. In fact, China has become the largest market for flat panel TVs and will continue to be throughout the forecast period. The Asia Pacific region is positioned for strongest growth as the late-adopting India market begins to boom.