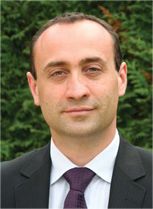 SCN: What is your position, and what does it entail?
Adrien Corso: I officially joined Analog Way as CEO in May 2009, but I have been in touch with the team since I was approached in late 2008. Before that, I worked as general manager of a subsidiary of Mettler- Toledo, the world’s largest precision scales manufacturer. I am now in charge of the overall management of the company, including our subsidiaries in the U.S. and Asia.

SCN: How has your background prepared you for your new role?
AC: The design and manufacturing of measuring instruments requires a technical expertise somewhat similar to pro AV products. I feel therefore at home when talking with Analog Way’s engineers. One aspect of the measuring instruments industry is the huge significance manufacturers attach to quality management in their operations—high stakes can indeed depend on the precision and reliability of a set of instruments in some sensitive applications. For all managers involved in that business, quality management is therefore some kind of a religion.

This is probably one of the areas where my former experience will be the most valuable to the team. It is all the more important that quality will definitely be, in the years to come, in the very center of our strategy. We intend to bring Analog Way’s products and customer service to the highest quality standards in pro AV, and still keep up with the company’s long history of technological innovation.

SCN: What else in your background will be influential at your new job?
AC: I was born in a family with multicultural European roots. I always worked for multinational corporations in an international environment, often abroad and overseas. This is probably a must to have fun running Analog Way’s business. Almost 90 percent of our production is shipped outside of our home country, virtually all around the globe!

SCN: Analog Way celebrates its 20th anniversary this year. What is important about this milestone for the company, and for you?
AC: One often says that 20 years makes a generation. This is what we are experiencing in Analog Way today.

The company’s history is a nice story of a business founded in 1989 by two childhood friends, both brilliant engineers and high-tech fanatics. Twenty years later, 2009 is the moment that the last of the two founders still involved in the business (Marc Loret) chose to implement his plans for Analog Way’s future. He not only handed over his CEO position in May to progressively withdraw from operational duties, but he also invested massively to reinforce the team with new talents in several areas of expertise.

SCN: What is the greatest challenge that you face?
AC: Analog Way is so far a business built by engineers, therefore mainly focused on technology. We want our team to be more customer-based. Today, customers are coming to Analog Way to purchase high technology. In the future, we want the same (and others) to come to us to purchase not only smart technical solutions, but comfort and peace of mind as well.

SCN: Are there any new initiatives we are likely to see from Analog Way in the near future?
AC: Starting with the InfoComm Show in June, and later in 2009 and 2010, Analog Way is launching several series of new products (switchers and control tools) well adapted to the system integration market.

The development of those products was somehow already influenced by the new management concepts we want to implement in the company. They were designed for the first time with the help of customers, during workshops in the field. Their hardware as well as software architectures were fully thought out to optimize both reliability and user friendliness.