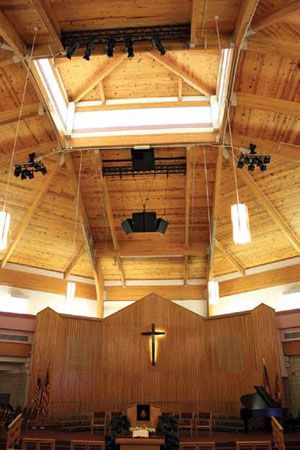 From a custom-designed truss on the wooden ceiling, two Danley SM-96 full-range loudspeakers rotated 90-degrees provide 120-degrees of horizontal coverage. A pair of Danley SM-60Fs provide side fill from the same location.

CLEARWATER, FL—The Salvation Army is consistently ranked as one of the most popular philanthropic groups in the United States. Its name conjures images of Christmastime bell-ringers and thrift stores, both of which provide support for the Army’s vast network of social support programs and its comprehensive disaster relief aid. It is perhaps ironic that despite its very public alignment as a Christian organization, the Salvation Army is not well known for its church services. Its Clearwater, FL church has grown over the decades, in its congregation and its physical space, as a result of local “adherents” joining and officers from around the country retiring to its Floridian splendor. After moving to a beautiful new building in 1990 with sanctuary capacity for 385 and overflow capacity for over 300 more, the congregants suffered with a woefully inadequate sound system. Paul Garner of Florida-based CSI : Christian Sound Installations recently replaced it with Danley Sound Labs full-range loudspeakers, subwoofers, monitors, and processing, giving the church the intelligibility it had so lacked and ringing in a new era of engaging services for senior church members and the next generation alike.

“The main trouble with the old system was a profound lack of intelligibility together with deeply uneven coverage,” Garner explained. “It started out as a tight-packed center cluster of horn-loaded cabinets, and the church paid someone too much money to explode the cluster out. Instead of improving intelligibility, the ‘fix’ led to even worse interference. It was hard to understand what was being said from any seat, and it was truly impossible to understand what was being said in the front rows and the back corners. When they asked me to assess the situation, I modeled the room in EASE and determined that there was no configuration of the existing speakers that would lead to even marginally acceptable performance.”

Because the church officials had not heard of Danley Sound Labs, Garner brought in a pair of Danley SM-60F molded loudspeakers on poles and set them up on stage. The head of the church, Captain Zach Bell, walked around with a microphone and quickly determined that the pair of Danley loudspeakers on poles was already outperforming the existing system. “I told him, ‘Wait until we engineer it correctly so that the energy is focused on the congregation and not the walls,’” Garner said. The permanent system adds little complication to the simplicity of the demo. From a custom-designed truss on the wooden ceiling, Garner tightly packed two Danley SM-96 full-range loudspeakers rotated 90-degrees so as to provide 120-degrees of horizontal coverage. A pair of Danley SM-60Fs provide side fill from the same location.

“I initially thought that the church might want to forego a subwoofer because the services don’t include bass-heavy instruments and the congregation is composed of individuals who are, on average, older,” Garner said. “But Captain Bell said that, without detracting from the service for the older members, the church was eager to welcome a younger generation. And a contemporary sound, with a full bottom end, would be part of the attraction.” Garner coupled a Danley TH -212 subwoofer to the ceiling and powered it with an Electro-Voice Q1212 amplifier. “During tuning, we had the subwoofer cranked up, and it was literally shaking the building,” he laughed. “But of course I backed it down. Now it fills things in and rounds out the response… with tons of headroom!”

For the rest of the loudspeakers, Garner repurposed the church’s rack of Crown power amps, and an analog Midas console still provides the FOH engineer with a familiar interface. But backing the new loudspeakers and subwoofer is a new Danley DSLP48 signal processor that Garner pressed to its fullest extent. The unit has four inputs and eight outputs, and only two inputs and three outputs were needed for the main system. He used several of the additional outputs to feed the existing systems in the overflow rooms, lobby, and cry room. “We used the Danley processor to equalize and time align all of those spaces,” said Garner. “Now, when the sanctuary doors are open and you walk into the lobby, you hear just one coherent sound. It all hangs together nicely.” Because the Danley DSLP48 easily connects to a laptop for programming, Garner was able to start tuning the system from a rough template that he had created off-site.

Because CSI was already overhauling the sound system, the Salvation Army Church asked the company to address the sanctuary’s lighting, which also left much to be desired. Explained Garner, “they had too few Lekos and their position was too steep relative to the stage.” Garner added new lights at multiple angles so as to wash the stage in a cumulatively more diffuse, arguably more holy light. To that relatively subtle addition, the church requested two Elation Platinum Pro 5R moving gobo lights. “They initially wanted moving spotlights, but they got a lot more,” said Garner. “The moving gobo has inspired all kinds of creative uses, such as turning their very bright lights into a rising sun motif to accompany a like-themed sermon. I know they’ve also used them for a rain and snow effect.”

With such radical improvements in the sanctuary, Captain Bell asked Garner to consider the sound system in the adjoining gymnasium, which is used almost every day for community events and meetings, in addition to regular use for indoor sports. “When I suggested replacing their collection of beefy-looking double-15 cabinets with just two smaller looking Danley SH -100s, they stared at me like I was crazy,” said Garner. “But the sound of the two Danley boxes, together with the existing amps and 1/3-octave EQ, is much bigger and truer than the sound of the old boxes. And as a bonus, the single point-source design of the SH -100 makes the system vastly more resistant to feedback.”

The church is so happy with the performance of the Danley boxes that when the onstage musicians requested a similar upgrade, they approached Garner and asked if Danley made monitors as well. Garner obliged, installing a Danley SH -100M monitor on each side of the stage.

He continued, “It used to be that to get high-end sound and visual effects, you had to go to a mega-church,” said Garner. “This installation is an excellent example of what modern technology can do for a midsized church.”