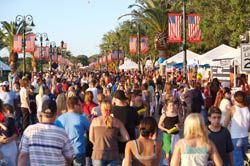 Using a fiber optic CobraNet backbone run by a Harman HiQnet system, music can be distributed throughout the entire park at Altamonte Spings, FL, to designated zones within the park, or merely to the immediate location of a stage setup.
Even though Teer, a design and install firm located in Orlando, had won the design competition, it was forced to bid all over again as the installation company since the project involved a municipal government bound to offer aspects of a project through the bidding process. Teer won that too, because of its design and installation expertise and because it proved to the city they could implement a networked audio and video system in a large development. "I think a big reason we won both the design and installation contracts," said Teer Engineering president John Teer, "was that we demonstrated that a high quality, easily operated, yet sophisticated network could be implemented based on Harman HiQnet technology interacting with the standard of CobraNet. Given that, we could provide the community with a 'plug-and-play' environment."The overall design called for a fiber optic CobraNet backbone run by Harman HiQnet system. Since the programmers at Teer were familiar with the BSS Audio Soundweb London system, they used that as their programming base. Throughout the waterfront park, there are nine locations that permit a paging mic, audio submixer, or video inputs to be connected, and they operate through the Soundweb London devices located at those nodes.

The idea was that if, for example, they wanted to bring in a rental company or sound company for a performance, they could set up a stage and plug into the system at that location. From there, using the AMX touchscreen interface, it would be a simple matter to program where the sound is distributed. It can be sent throughout the entire park or to designated zones within the park or merely to the immediate location of that stage setup. This is true of all programming whether it's video, paging, or background music. The system further permits the simultaneous routing of performances or programs from numerous locations throughout the park to multiple or single zones of the park.

The system accommodates inputs for composite video and RGB video in the same manner, along with associated audio. A Multidyne fiber optic matrix switcher was custom-tailored to deal with high bandwidth video signal distribution. For the operators to interface with this gear, the AMX touch panels at each location are programmed so that even moderately-trained park rangers can easily operate them.

Of course, more sophisticated use of the system is possible. Maintenance and system monitoring can be done via the touchscreens as well. For example, Crown amplifiers are connected to the network and, via their built-in USP3 cards, can transmit HiQnet data to the Soundweb London devices and HiQnet London Architect software.

"Even though the Crown HiQnet data is transmitted to the AMX panels via the Soundweb London devices, even the maintenance engineers don't need to understand that level of programming," Teer noted. "They can just read the status panel and find out if a certain amp is running too hot or if something needs to be re-set and where its location is and take care of it. The sophistication of the system is hidden to the basic operators."

The Crown amps drive approximately 170 JBL Control 25 loudspeakers, 22 Control 28s, and two Control 30s. These are used for both paging and background music zones, but can also serve as fill and distribution speakers when a larger PA is brought in for a concert. It's all available through the touchscreen, permitting operators to route the concert sound to any area of the park, or to shut it off to other areas.