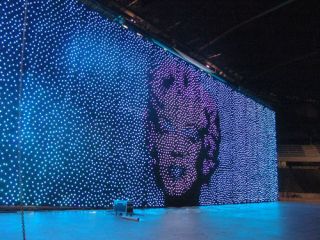 UK-based drapes, starcloth, LED and visual effects specialist S+H Technical Support supplied its ShowLED Animation cloths to the BBC’s Children In Need 2012 appeal night telethon on BBC One, which was broadcast live from TC1 at the BBC TV Centre, London.

ShowLED Animation cloth on display at another event supplied by S+H Technical Support The show's set was designed by Dominic Tolfts, whose brief was to bring a new look to the evening hosted by Sir Terry Wogan, Fearne Cotton, Tess Daly and Nick Grimshaw.

Tolfts' visual concept transformed the environment into a take on the colorful and vibrant world of BBC Children in Need's own Pudsey Bear. The Animation Cloth was used to wrap behind the set and around 180 degrees of the studio.

Highlights of the night included appearances by One Direction and Girls Aloud, who recorded this years' CiN single "Something New" and a music video featuring 25 of Britain's Olympic and Paralympic heroes set to Basement Jaxx's 'Do Your Thing', including a special section featuring members of the 3 Day Eventing team - Zara Phillips, Nicola Wilson and Tina Cook - dancing the 'Gangnam Style'.

At the back of the set and immediately behind the main performance area (there were three stages in total) was a large high resolution LED screen which split vertically for entrances/exits, and this was masked with the Animation Cloth to make it into an oval shape.

The screen was flown on a truss and surrounded by a separate ovular frame, flown just in front and constructed with a special gulley into which the cloth was neatly tucked, creating a surrounding effect. The screen was finished off by an illuminated border.

A series of abstract and ambient video effects were run through the Animation Cloth, making the screen appear to be 'floating'. Video content was under the control of lighting and visuals designer/director Girdip Mahal.

Having used other S+H cloths and products in the past, it was the first time Tolfts had tried the Animation Cloth on one of his designs. "The Animation Cloth provided another dynamic layer and depth to the design, giving everything a more 3D appearance and the exact effect that I had in mind.”

S+H's Animation Cloth has 31 randomly positioned RGB LEDs per square meter which can be individually controlled to create a wide range of effects using different source materials that can be controlled via any of the popular media servers.