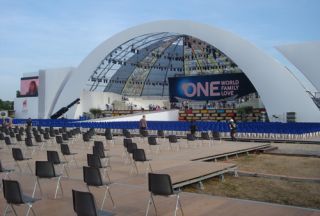 The Catholic Church organizes the World Meeting of Families every three years. This year’s five-day event was held May 30 through June 3, including two main services led by Pope Benedict XVI. An estimated one million people were at Bresso Airport to witness the services, which were also broadcast on television worldwide.

M.M.S. Srl also connected 22 Barix Exstreamer 100 to Ubiquiti Nanostation receivers for audio decoding at the loudspeaker points. The loudspeakers were distributed amongst 24 towers to cover numerous audio paths, with the most distant end points located approximately three-quarters of a mile from the stage.