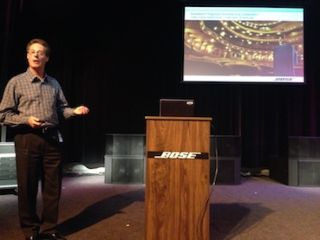 Bose Corporation opened its doors to the pro audio press for the first time, allowing the Professional Systems Division to host an editor’s day, sharing the company’s core values and approach to product development.

Of course, Bose is first and foremost recognized in the consumer business. But as research engineer Joe Jankovsky opined while leading a tour of the iconic patent wall—or walls—even though it is the smallest division, “Pro is the best kept secret at the company.” He noted how the idea for RoomMatch, Bose’s innovative progressive directivity line arrays, originated 20 years ago.

A unique company culture and longstanding dedication to research is at the root of this two-decade spanning product development—an element on full display during the day of demos, tours, and meetings covering the entire spectrum of technology divisions at the Framingham, MA-based audio manufacturer.

“The company exists to fund research,” declared Bose president Bob Maresca, in an exclusive Q&A during the editor’s day.

He continued on to tout the benefits of remaining privately held and not taking loans from people or banks: “I don’t have stockholders breathing down my neck saying, ‘You need to grow, you need to increase shareholder value.’”

The research initiative is extended by Bose’s unique relationship with MIT and its special purpose trust, which provides the university with a dividend every year. In 2011, Dr. Bose donated a majority of Bose Corporation's non-voting shares to MIT, meaning the university can't sell its shares and doesn't participate in the management or governance of Bose. The company remains private and independent. “It’s a very synergistic arrangement between MIT and [Bose]. It makes sense,” he said. “Dr. Bose got his bachelor’s, master’s, and doctorate from MIT; many of us were students of his at MIT. He taught at MIT for over 40 years. So he has a deep debt of gratitude to them. Being able to provide them with a yearly contribution to advance their mission along with having the benefit of us remaining privately held—it’s a marriage made in heaven.”

In the interest of R&D, the department Maresca originally started in back in 1986, he reflected that, “If you’re not failing sometimes, you’re not pushing hard enough.”

And push hard enough is exactly what project engineers like Paul Fidlin and Bill Becker did in developing RoomMatch and the corresponding PowerMatch smart amplifiers (respectively). When pressed to name some of these inevitable failures in development, the two chuckled at the thought of everything that had been blown up in the process. The components were designed alongside each other, with the intention they could be easily sold independently. A recent development with PowerMatch is the addition of a Dante card.

Although the two products were introduced in 2011, Bose has patiently allowed them to take off, and executives feel it has now begun to be embraced in a significant way. Two big projects of note are the Boston Opera House and the Church of Apostles in Atlanta, GA. House of worship applications is an area executives explained that the scalable nature of RoomMatch is a great fit for.

Maresca expressed pride in the technology the pro group has developed, but, he added humbly, “We’ve got a lot of work to get the message out there that these breakthroughs—like the L1 systems, like the RoomMatch, like the PowerMatch—are delivering experiences that are just unparalleled.”