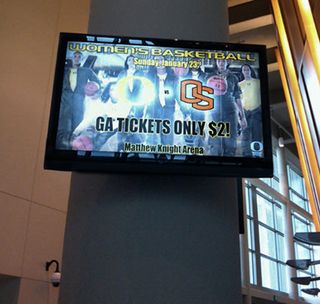 "We needed to give fans a way to stay connected with the game when they leave the main arena to purchase snacks or to enjoy the new clubrooms," said Megan Robertson, director of promotions at University of Oregon. "Because of Haivision's IP video system, fans can continue to enjoy the game even when they leave their seats. They can also watch other live games in the VIP clubrooms before the Ducks game. This means we can entice fans to come to the arena earlier than usual, attracting an audience that would normally watch these games elsewhere."

More than 140 CoolSign players power displays of various sizes, installed in common areas throughout the venue, delivering both signage content and low-latency IP video feeds. The players are controlled from a central location with the CoolSign digital signage system. The CoolSign system includes a CoolSign Server, DataWatcher, Network Manager, and a Content Creator tool. To capture live gameplay directly from the court and from other outside games on over-the-air commercial channels, the university is using four HD Makito encoders, one for each HD video source. Makito is a low latency, high performance encoder, combining the efficiencies of H.264 video compressions and the image quality of full 1080p60. The encoded live streams are then configured within the CoolSign system and distributed throughout the arena displays via the CoolSign players for fans to view from anywhere. Other content—such as news, advertisements, and updated game scores—is distributed throughout the arena displays as well.

Every concession stand is equipped with a CoolSign digital signage player displaying dynamic menus, promotions, and advertising. Product pricing and menu details can be changed instantly at all or selected locations via the CoolSign system located in the central control room, delivering targeted promotions.