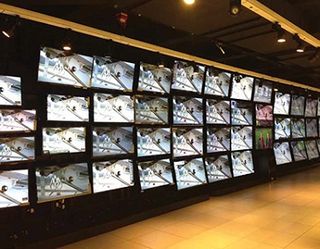 Most consumers need to see the latest in TV technology in person before making a purchasing decision. Perhaps no other retailer understands this better than B&H Photo, one of the world’s largest non-chain suppliers of photo, video, and home entertainment systems. Located in New York City, B&H relies heavily on its giant 48-screen TV video wall, 17-screen TV gondolas, and 40-projector demo area to present each at its best and move televisions and projectors out the door. Ensuring all the displays are performing at their peak resolution and image clarity is essential for customers to make informed decisions.

B&H relies on Atlona hardware to distribute 1080p HD content from Blu-ray and media players to each screen and projector in the correct format, as well as future-proof its 48-screen TV video wall to support 4K Ultra HD content.

Staying ahead of technology is an ongoing mission for B&H, and as the retailer continued to add the most cutting-edge products to its home entertainment line-up, the time had come for a new multi-format, in-store video distribution network. As part of a major retrofit of the department’s infrastructure, B&H required an efficient and reliable AV system to distribute 1080p HD content from individual Blu-ray and media players to each screen and projector in the format required, as well as future-proof the TV video wall to support 4K Ultra HD content. The system also had to down-convert for TVs and projectors that don’t support 1080p video resolution.

“Every day hundreds of potential customers view displays expecting to experience the most advanced video resolutions available,” said Keith Cenname, display merchandiser for B&H. “The loss-less HD signal from the Blu-ray players, combined with expertise from our professional staff, allows us to recommend the perfect television or projector to our customers.”

At the heart of the new B&H video distribution system, eight Atlona AT-HDCAT-8 2x8 HDBaseT distribution amplifiers in a cascaded configuration, each with eight category cable outputs, distribute signal from individual Blu-ray players to Atlona AT-HDRX HDBaseT receivers located at each TV in the video wall and on gondolas—with some located up to 100 feet away. The 40-projector demo area distributes HD video from a Blu-ray and media player via four Atlona AT-HD-V18 1x8 and one AT-HD-V116 1x16 HDMI distribution amplifiers.

To reduce costs and system complexity, with the added benefit of simplifying installation, the AT-HDCAT-8 units deliver power to the AT-HDRX Receivers via Power over Category cable (PoCc) technology, eliminating the need for separate power supplies at each receiver. At each display, an Atlona AT-HDRX Receiver converts the connection from HDBaseT to HDMI. For displays and projectors with maximum resolutions lower than 1080p, the AT-HDRX Receiver passes the signal through an Atlona AT-HD550 HDMI Up/Down Scaler/Converter to optimize to the display’s native maximum resolution. Each low-profile receiver is located behind each TV , making it easier to change out displays as needed.

The new video system offers a more immersive video experience to B&H customers and created a stronger sales tool for B&H staff. In the highly competitive world of electronics retailing, B&H knows it must master the art of the demo to generate sales success. The reliable distribution of HD video with optimized resolution and image clarity enables B&H customers to truly evaluate each TV ’s performance on its own merits.

“Our new video system is virtually carefree for our sales staff,” said Cenname. “We just simply change the Blu-ray disc or media player and the Atlona distribution system makes each display and projector perform at its very best.”