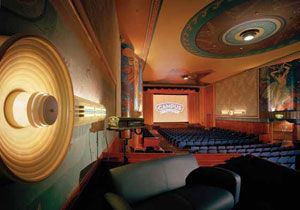 Bucknell University’s Campus Theatre was retrofitted with a Christie CP2220 projector and tab-tensioned Stewart screen to make the historical theater relevant for both the university and community for years to come.

Old-school historic theaters were not built to accommodate delivery of a 1,250 pound, 40-foot crate containing a 16-foot by 36-foot tab tension, motorized Stewart projection screen. But this logistical challenge did not deter the team at Advanced AV, which successfully navigated a tractor-trailer through Lewisburg, PA’s tight alleyways to squeeze this crate through the only available stage door at Bucknell University’s Campus Theatre.

When architect Ted Strausser and AV consultant Randall Presswood approached Advanced AV’s Mike Morgan about renovating the historic theatre, he said, “I knew immediately that we would be challenged with both the integration of the technology and honoring the historic values of the space. The theater is shared with Bucknell University, and therefore had to be accommodative to university needs as well as feature film presentation.”

While the project was more exciting than the average cookie cutter screen installation, it presented various challenges, mostly relating to infrastructure needs such as power, conduit, network needs, and proper ventilation for the projector exhaust. “We would only get one shot at this and we needed to be sure that all immediate needs got addressed, as well as any future upgrades that might arise down the road such as digital inputs,” Morgan said. “Our engineering staff looked at this closely, and under the direction of my lead engineer, Ken Kuznicki, and lead drafter, Sean O’Connell, we accomplished all of this via intense coordination with the construction team.”

The Advanced AV team felt that since the space was primarily a movie theater, the projection system installed should accommodate both 2K and 4K potential. Morgan recommended the CP2220 digital cinema projector from Christie Digital. “This provided us with the ability to meet all specifications, such as throw distance of 75-feet, brightness of 14,000 lumens, and resolution of 2,048 x 1,080, while at the same time providing a future upgrade path to 4K resolution.

“The image we were able to produce through broadcast-quality scaling was phenomenal and complemented both the content as well as the historical space.”

Some other key components that were used were Extron AAP twisted pair transmitters and rack-mounted receivers for VG A, and video inputs that were located in three floorboxes installed throughout the facility for PC and video connectivity, allowing the university to conduct presentations from various areas in the theater.

An AMX control system was used to make the fairly complex system easier to use. A wireless panel with tech level menus was located in the projection booth for more advanced control.

An AMX control system was used to make the fairly complex system easier to use. Two hardwired control panels with limited features were placed in the theater, and a wireless panel with tech-level menus was located in the projection booth for more advanced control.

Advanced AV collaborated with a separate audio contractor to integrate the audio feeds into a BSS BLU series DSP processor the integrator provided. The collaboration included setting up all files and tuning the system before it was sent to the amps and the rest of the speakers.

Other components integrated included an Analog Way SMX 200 analog and digital switcher/ scaler. Advanced AV switched all VG A and video signals and scaled them up to full 1080p resolution. A Denon Blu-ray player was fed directly to the Christie projector, which processed and scaled the signal to its native 2K resolution. A Middle Atlantic rack was selected to house the equipment.

“At the end of the day, all parties involved with entire building renovation were extremely pleased with the results,” Morgan said. “Both the space and technology contained within are exceptional, and the Campus Theatre in Lewisburg is now positioned to provide the community and university with a world-class presentation space for many years to come.”

The revamped theater officially opened at the end of August. “Feedback has been phenomenal. Everybody I speak to is impressed with both the physical renovation as well as the technology that was added,” Morgan said. “People are literally amazed at what this has produced for both the community as well as the university. It has transformed this historic building and made it relevant for another hundred years.”