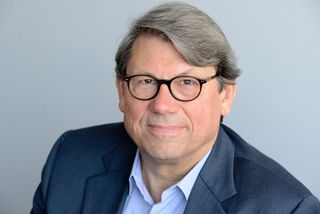 Bill Beck
As an ardent follower of all things large venue, and cinema– when it comes to projection– I’ve always been impressed by Bill’s technical knowledge of laser light source projection, and more importantly the regulatory and marketing issues. In what was the most important news event of the year to date regarding video projection, Beck was highly involved in the ground-breaking session at the NAB Cinema Summit in April, “Laser Illuminated Projectors: What's New and When Will They Arrive?” In that session Bill Beck, as President of BTM Consulting, moderated panelists Pete Ludé, CTO of Mission Rock Digital; Goran Stojmenovik , Product Manager Laser Projection, Barco; Richard McPherson of NEC Display Solutions; and Don Shaw, Senior Director of Product Management for Entertainment Solutions at Christie. This was not your father’s trade show panel, full of hype and vaporware– it was three major projector manufactures explaining their new Laser projectors. (Read that story from NAB here.)

According to Barco, Bill Beck will “work closely with its Sales and R&D teams to further expand its reach into global markets... as it embarks upon its next phase of commercial sales and laser market development.”

As a photonics entrepreneur for more than three decades, and co-founder and former chairman of the Laser Illuminated Projector Association (LIPA), Bill brings in-depth knowledge of laser technology and the specific requirements for its application.

“Bill was one of the first to recognize the potential of laser illumination for premium digital cinema. We simply call him ‘The Laser Guy’,” comments Todd Hoddick, Vice President of Global Entertainment for Barco. “For more than 10 years, he has been on the leading edge of laser technology and focused his efforts on the image quality and operating benefits of laser illumination for cinema exhibition and other high-performance projection applications.

Pete Ludé (at podium) was wearing his LIPA (Laser Illuminated Projection Association) hat, when he gave an update on the regulatory issues for laser projectors at the Cinema Summit at NAB in April, as session moderator Bill Beck (seated at right) presided.

“Since its first demos in 2012, Barco has been the frontrunner in laser projection, establishing an early lead in laser illumination technology,” commented Beck in the official Barco press release this morning. “I’m excited about the opportunity to contribute my expertise toward evolving Barco’s laser technology to the next stage, while helping to strengthen its sales and marketing infrastructure to support further growth. Our new collaboration reflects a shared vision focused on achieving not only the best image quality, but also a commercially attractive laser projector that ensures safety, reliability, energy efficiency and a long lifetime. Their diligence in all of these areas is why I joined the Barco team.”

“High-brightness laser projection is still in its early stages,” continued Beck. “By collaborating with Barco’s R&D team, I will help the company leverage the long-term potential of laser technology, which offers dramatically reduced operating and maintenance costs, as well as lower power consumption, as the technology matures. But most of all, I am excited about the opportunity to play a pivotal role in developing the future products and applications that laser technology will enable.”