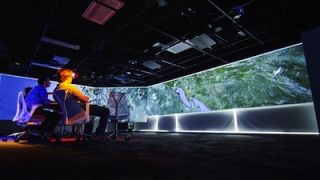 AVI-SPL has expanded its Control Room Group (CRG) capabilities into Europe with the creation of a UK-based team, headquartered in the AVI-SPL office in Farnborough, England.

AVI-SPL has 12 years of experience designing, implementing and servicing complex mission critical solution centers around the world, leveraging a specialized team of over 50 experts primarily based in the U.S. With the opening of AVI-SPL’s UK operations in 2012, CRG is able to expand its capabilities into the region and adding industry-leading experts to the team.

Since CRG’s inception, the team has completed more than 400 projects in 17 countries including a new Office of Emergency Management for one of the largest cities in the world. In addition to command and control centers, CRG specializes in implementing advanced virtualization solutions including virtual reality caves, 3D imaging and interactive video walls.

“I’m enthusiastic to join the AVI-SPL team because of their leadership as an innovator and depth of experienced engineering talent,” said Paul Brooks, CRG’s new business development manager, EMEA, AVI-SPL. “I have been involved with control room environments for over 20 years and believe AVI-SPL has the opportunity to be a leading provider of control rooms in Europe.”

James Shanks, managing director, EMEA, AVI-SPL commented, “As business development manager in our UK headquarters, Brooks will lead our Control Room Group initiatives in EMEA and support our client needs across all vertical markets in the region.”

“In the past, we have been quite successful driving business from the U.S. on a global basis,” said Steven Gameros, AVI-SPL’s new U.S. corporate market manager for CRG. “However, adding Paul Brooks and expanding the team in Europe gives us a large competitive advantage in the region. This ability to scale and drive growth is one of the reasons I joined the AVI-SPL team.”

“The ability to add talent like Steven and Paul to our team is a great example of our continued investments to be a true global provider for our customers,” said Brad Herrick, general manager, Control Room Group, AVI-SPL. “Their extensive knowledge and experience in our industry will play a key role in CRG’s continued success as the industry leader in critical environment solutions.”