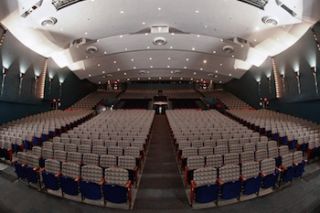 Washington, D.C.--For just over 50 years, Cramton Auditorium on the campus of Howard University in Washington, D.C. has welcomed world leaders, key political figures and countless entertainers to its renowned stage. As part of an extensive renovation project celebrating its gold anniversary, the university recently updated the 1,500-seat venue’s audio facilities with the addition of a full L-Acoustics KUDO system.

RCI Systems of nearby Beltsville, MD provided the sale and installation of the new setup, which now features left and right arrays of eight KUDO per side paired with adjacent low-frequency arrays of four SB28. The university also purchased six coaxial 8XTi enclosures for use as front-fills across the stage lip as needed. All systems are powered by a total of 11 LA8 amplified controllers.

With the sound system retrofit representing only a part of the Cramton’s overall renovation, RCI’s Bob Capotosto and Gene Ingham appreciated the versatility that KUDO provided.

“We were initially unable to fly arrays in the room because they needed to put steel above the ceiling for our rigging points,” Capotosto said. “However, the challenge was that the venue had not gone dark during the construction phase, so we set up the KUDOs onstage in a horizontal configuration to get them through some shows. Even in that temporary orientation, the system sounded great. In fact, the university was so impressed with it that they almost didn’t want us to fly the arrays at all. That tells you how versatile KUDO is.”

“The clarity of this system is unbelievable,” said Cody Cox, strategic operations manager for Cramton Auditorium. “While L-Acoustics’ technician was here to do the system calibration, I walked through every seating area and could discern literally no difference in sound. Audio-wise there’s not a bad seat in the house. And the lows are phenomenal as well. You can really feel them throughout the building.”

“Chrisette Michele was the first artist to officially use our new system in mid-January and everyone noticed the difference right away,” he continued. “We’ve already had so many positive comments from audiences as well as from performers who have previously played here. I’ve booked a number of upcoming shows based on the simple fact that someone either personally heard our new system or heard praise about it through word of mouth, which is fantastic. With our previous system, we had gradually become less attractive to many artists coming through town because they would need to bring in their own production or rent a system. But with L-Acoustics in the house, Cramton Auditorium is definitely a top-notch, rider-friendly tour stop once again.”

Having served as one of the host sites for the Democratic party presidential debates of 2007, Cramton Auditorium regularly presents an extremely diverse calendar of events, including concerts, theatrical productions, fashion shows, sporting events, weekly church services, comedians, guest lecturers and, of course, university-related functions. For more information on the venue and its schedule, visit cramtonauditorium.org.