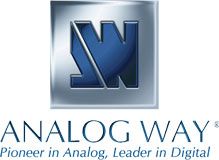 “We were honored to be selected to partner with SNA on one of the highest-profile projects in the world,” said Seth Teates, Analog Way Regional Sales Manager. “We supported the SNA team from the initial signal flow review to a full system mock up and demo, post-sale programming and on-site commissioning. We worked closely together to make sure the solution exceeded expectations.”

The 40-story high-rise at the corner of 7th Avenue and West 47th Street will house the Marriott EDITION hotel as well as many prominent tenants such as NFL Experience, an exciting new interactive fan attraction. The building features SNA’s wrap-around S|Video display canvas, one of the largest continuous exterior displays in the world representing more than 17,000 square feet of LED display technology. With 8K/60Hz processing, the screen is built to accommodate the next generation of video and broadcast media content.

Analog Way had previously collaborated with SNA on several other high-profile projects, including the LED screens at the nearby 719 7th Avenue at Times Square, and the LED wall in the lobby of the Salesforce headquarters in San Francisco.

Instead of relying exclusively on media servers to drive the Times Square display SNA opted to have Analog Way create an 8K/60Hz scaling solution using the company’s LiveCore product line. Analog Way scalers are the most advanced in the world, with extremely low latency and the best image quality available.

Four Ascender 48 4K processors (ASC4806-4K-PL) deliver 16 feeds to the display, all with precise sub-frame level sync lock. Having precise sync lock on all 16 outputs ensures zero tearing of the image across the huge pixel space.

The Analog Way processing solution is capable of working with a multitude of different sources, scaling any source type to any size on the LED display. This offers SNA and the screen’s tenant incredible flexibility and security since they are not tied to a single source device or format.

“We can put a 4K source in the middle of the screen and surround it with traditional HD feeds and we’ll get pixel-perfect, clear imagery with the processors,” said Pat Green, Senior Director of Systems at SNA Displays. “That capability will likely help the owner land high-profile tenants for screen content. Who knows what the display will eventually be used for, but it’s clear that this screen is the only one in Times Square that can handle many of the modern demands of high-resolution TV and sports broadcasting."

“Analog Way processors are a very stable product line with no software set or drivers to fail,” added Green. “We view the processors as infrastructure, the hub of all the activity, and we like the heart of our system to be very stable and reliable with a low failure rate.”

“We actually designed the RCU around this project,” said Brian Macauto, Analog Way’s Director of Business Development. “We typically use our chassis to drive 4-8 outputs. But this LED display required 16 discrete outputs to create an 8K video canvas. So we developed the RCU master controller to unleash all the horsepower behind Ascender. It takes our awesome scaling core technology and adds a meta layer of master control across multiple chassis.”

Using RCU hooks, the team was able to program the system remotely over an approximate three-week period.

“We could do about 90 percent of the commissioning from our office in Atlanta,” Macauto said. “That gave us more flexibility with work schedules, which is so important when you’re relying on suppliers for a building still under construction.”

“The RCU really maximized remote support capabilities,” Green said. “Once we were on site we set up WiFi hot spots so the controller could verify the system, which made for a very fast turn on of the screen. We went from getting power to running video in nine business days. For a 17,000 square-foot digital display that’s tremendously fast! We were able to talk to the engineering team about our needs; they saw the value in adapting the product and went for it. We know that Analog Way will be there for us as a partner for the screen in the years to come. Any new feature requests, any expertise we need they will provide it. There’s tremendous value in having a partner like that.”

“SNA recognizes that a vendor who offers excellent products combined with high level customer support can make the difference between a minimally compliant system and a well-integrated, timely solution," said Jay Gonzalez, Analog Way President of the Americas. "At Analog Way, we pride ourselves on not only manufacturing the world’s most elegant and powerful video processors, but also in delivering world-class customer support, from concept to outcome. We are fully committed to excellence!”