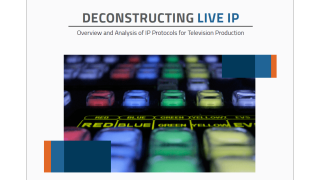 Alpha Video released a white paper on Monday that provides an overview and analysis of competing IP protocols for television production. These protocols include AIMS, ASPEN, NewTek NDI, and Sony NMI.

Commenting on the white paper, Bryan Nelson, Alpha Video’s Broadcast Systems account executive (@BryanAlphaVideo), said, “One of the hottest topics at the National Association of Broadcasters conference held in April was the status of broadcast IP protocols. It was also one of the most confusing,” Nelson added. “Most of what we currently hear about this topic is being provided by the manufactures who support one or more of the protocols. This white paper was written to provide an unbiased and independent analysis of this technology.”

The white paper, entitled “Deconstructing Live IP,” is available as a free download.