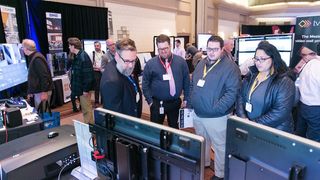 Attendee Dan Pierce of Building Infrastructure Group emphasized the importance of these local shows, saying that he and his fellow Chantilly, VA-based companies would likely not have been able to go to another event. This was his first time attending.

“We got to learn a lot of stuff, see a lot of things,” Pierce said. He specifically called out Chief’s Fusion Dynamic Height Adjustable Mobile Cart as a cool product, as well as the seamless digital signage offerings.

In addition to walking the floor, Pierce attended about five sessions, including the keynote address—which he described as very interactive—as well as “The Future of Digital Signage in Smart Connected Cities” and “Digital Signage Design Principles.”

Another attendee, Greg Lockwood of Net100 also attended the Design Principles session. “I was just in Chuck Espinoza’s seminar.... and I got some interesting information on digital signage,” he said. “That’s obviously a big market, a growing market.”

Lockwood is in the network infrastructure industry, but sees digital signage as a real opportunity. “That’s really why I came down here: to learn some digital signage techniques and tactics.”

The sessions at the E4 AV Tour offer attendees the opportunity to earn CTS recertification units approved by education partner AVIXA; a scanned badge is the proof of attendance.

“We try to have every class certified,” said Almo vice president of marketing Melody Craigmyle. “It’s very valuable for CTS holders in terms of having renewal units, but the other reason we do that is we feel like it lends a level of credibility to our curriculum that you are not going to be walking into a product commercial. New this year, some of our courses are [CTS] -I and -D certified as, well.”

In a morning session titled “OLED: the Curve of the Future,” LG senior engineer John Fisher made clear that the title is more literal than figurative. OLED technology enables panels to have flexibility, which means curved and bendable displays are now possible. Additionally, OLED panels enable deeper blacks and truer whites than LCD, among other advantages, Fisher said.

Separately, Almo executive vice president Sam Taylor compared OLED to a sports car. “OLED right now is an expensive product to be manufactured, so the premium over LCD is high,” he said. “The adoption rate is going to be slow until manufacturers figure out how to make that less expensive. So right now it’s like going to the car dealership and buying the Tesla or the Porsche; until they get it down to the price of a Honda Accord, it’s not going to be massively adopted. It’s for the places where you need deep blacks, and it’s going in the high-end applications. If they get the price close enough, it will be widely adopted.”

Taylor and Craigmyle also touched on industry trends for 2018. 4K is already here in terms of content and the price point, so it is beginning to be widely adopted, Craigmyle said. Taylor emphasized that the industry should expect more growth in digital signage and huddle rooms, and Craigmyle called attention to indoor direct-view LEDs.