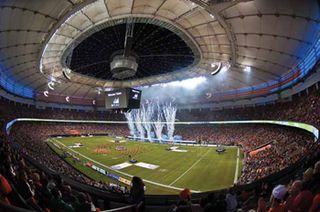 Getting a Handle on the Multitude of Options in Networked DSP

To paraphrase the adage popularized by computer scientist Andrew S. Tanenbaum, the nice thing about audio distribution transport and control protocols is that there are so many to choose from.

Manufacturers solve the problem of choice by supporting one or more protocols or by developing proprietary technology, while AVB now offers an industry-wide (and beyond) standard. One thing is apparent: installed sound and IT have become increasingly interdependent, making layer three protocols and TCP/IP compliance necessary bridges between the two industries.

“Some of our competitors have decided to stay with proprietary protocols; we’ve decided to stay open,” said Kevin Ivey, general manager at Peavey Commercial Audio, a participating AVnu Alliance member. “MediaMatrix from Peavey was really the very first networked DS P audio distribution transport and control system. We’ve continued to support CobraNet, but we have also over the last couple of years added the capability to support Dante from Audinate.”

He continued, “We see Dante as our gateway to AVB support. We think we’re running headlong into an age of full TCP/IP compliance, layer three and layer two support, inevitably. As the pipeline grows larger, we’ll be able to grow along with it.”

“Our team in Boulder is basically the team that initially developed CobraNet back in the day,” noted Gerry Tschetter, VP of marketing at QSC Audio. That said, the design of the company’s Q-Sys platform followed a proprietary route, and also derives its horsepower from the use of Intel rather than dedicated DSP chips.

“We wanted something that would work over an IP network, not just a local area. More and more we are seeing that when we go into facilities and there’s any kind of networking, there is involvement by an IT department. They tend to scowl if you talk about operating on anything other than layer three,” said Tschetter.

If sufficient momentum builds for AVB, then QSC might consider introducing an adaptor, he added, but noted, “AVB is not a layer three protocol.”

QSC is more interested in the nascent AES X192 high-performance streaming audio-over-IP interoperability protocol, which is layer three, said Tschetter, so avoids the need for dedicated hardware. “We’re more concerned that if the network can achieve certain performance parameters, we can operate on it. Ultimately the X192 approach is going to make sense to anything that is going to be in a facility, where it’s relying on an IT backbone.”

He added, “There’s a distinction to be made between being on the same network and being interoperable.”

Rather than offer a networkable DSP system, Rane offers systems that utilize FireWire bussing and are computer addressable, but also are designed specifically for ease of installation. According to Steve Macatee, director of product development and training at Rane Corporation, “It’s almost that we’ve taken a left turn and have purposely tried to be different [from the other manufacturers].”

“It’s stuff people don’t usually think about in the context of a networkable DSP device,” he said. For example, Rane’s HAL platform uses a system of LEDs to streamline wiring integrity during installation, based on the system designer’s configuration file setup.

The platform offers a new workflow: “While the rack is powered and connected to all the Cat-5 cables, we want you to crimp the cable and plug in the RAD remote audio devices. If you get green lights that means you can install [the RAD] in the wall and walk away. You know the Cat-5 is crimped correctly, you know the cable is pulled through the building correctly and not mislabeled, and you know that audio to and from that location is already working,” Macatee said.

Whereas other brands’ products might require the installer to set up an SN MP manager to detect which MAC address is on which physical port on an ethernet network switch, he continued, “HAL stores all this information. So as you hot-swap things, the devices are automatically location aware because everything is a home run.”

QSC’s next generation Q-SYS products, including the Core 500i, will serve smaller venues.

Similarly, a device can be easily moved between different iterations of HAL in separate systems, he noted. The firmware is stored in the HAL, which updates the device—back to old firmware or forward to new firmware, as appropriate—each time it’s moved between systems. “It’s a hard concept that’s hard to tackle in a traditional networked audio system,” he noted.

Since 2002 and the introduction of its Audia platform, Biamp has evolved from being an analog installed audio manufacturer into a networked DSP company, according to Graeme Harrison, EVP of marketing. “Almost 90 percent of our total turnover is networked DSPs,” he reported.

“Audia, I believe, was the first product with native TCP/IP control,” he added. Other systems at that time utilized the serial RS-232 protocol.

Biamp’s products represent a variety of networking paradigms. Audia, a CobraNet product, offers the ability to share the sum total of the DSP resources over a network. “We use heuristic logic to make some intelligent choices, and we do it on the fly,” said Harrison. “The ability to have DSP centralized or decentralized or in any combination, and all of the resources used in the most intelligent manner automatically, remains unique after 10 years.”

Nexia, a lower-priced product, uses a proprietary network and has limitations with regard to total system size. But Vocia, a product from an Australian company that Biamp acquired, offers still another paradigm.

“It still uses CobraNet and TCP/IP control, but this is a patented way of doing networked audio, where all of the intelligence is at the end points,” explained Harrision. “There’s no center; all of the matrixing is done in the cloud. In a life safety system like Vocia, having no central point of failure makes everything way safer.”

Biamp’s latest platform, Tesira, follows yet another networking paradigm. “It moves away from CobraNet to AVB, which we consider to be the protocol of the future,” he said. By eliminating the need for a CobraNet license for, say, a single mic channel, “AVB means that the ability to go more and more granular is real.”