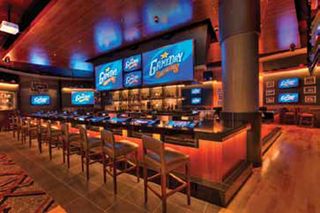 (Above) Eight satellite receivers and six cable boxes feed into a PureLink MX-3600 digital matrix router, which sends the video signals out to the displays inside the Game Day Sports Grill. (Left) The entrance of the Game Day sports grill with actual seat from behind home plate of Petco Park where the San Diego Padres Play.

EL CAJON, CA—Just as AVDB Group was facing both a tight deadline and issues with a video transport system, along came PureLink. The project at hand was for the new GameDay Sports Bar inside the Sycuan Casino, El Cajon, CA, part of a $27 million casino renovation.

“We were having problems with another system transporting video across fiber Cat-5 and we had to be ready for the Labor Day grand opening,” said Mike Stanger, senior AV engineer at AVDB. “We were then approached by [PureLink western regional sales manager] Michael Rapoport, who displayed their system and answered my tech questions.”

Working closely with architect Hnedak Boba, AVDB AV engineer Rebecca Sullins coordinated layout of the AV equipment in Nashville, while Stanger and Nate Hall, director of engineering, focused on the system design and programming of the Peavey MediaMatrix DSP and Crestron Control Systems.

The VoIP system needed 16 outputs to 40 displays. “A few weeks later we fired up the PureLink system and it worked right out of the box with no problems at all,” Stanger said. “This was the first time I’ve used their product and one of the first times I’ve had something work perfectly immediately. The Crestron programming was straightforward and easy. This made the job easier on our time crunch.”

AVDB, a five-year-old integration company with additional offices in Las Vegas, NV, Nashville, TN, and Phoenix, AZ, had worked previously for the Sycuan Casino and initially had been awarded the audio contract for the renovation.

Under the leadership of operations manager Cathy Burgoyne and project manager Mark Magill, the 26-inch displays were mounted in booths for local viewing of any game that is currently available. Eight satellite receivers and six cable boxes feed into the PureLink MX -3600 digital matrix router, which sends the video signals out to the displays. Audio processing is handled by the MediaMatrix NION 3 and amplified by two Lab. gruppen C68:4 amplifiers. The 74 Tannoy CSM 601 subwoofers provide coverage throughout the booth and seating areas, while six EV Evid 6.2 speakers cover the bar area. Low frequency is supported by six Tannoy CSM 801 sub woofers. A Crestron TPM 8-X wireless touch panel provides control interface of the Crestron AV-2 at the bar area, with a backup TPM C-9LB-T touch panel mount in the equipment rack.

“We chose the Sanyo projectors for their durability and because of our relationship with Sanyo, who met our timeline for the projectors,” Hall explained. The Holodisplays images look almost like plasmas, he continued. “The client really liked this image; it’s not from a standard screen. We’re using acrylic screens with a lot of gain and that really sets off the image when you see it. The original idea was for rear projection, but again, because of construction issues, we switched to front projection display. During the design phase, AVDB organized physical demonstrations with the product for the client and architect, ensuring optimal placement of the screens.”