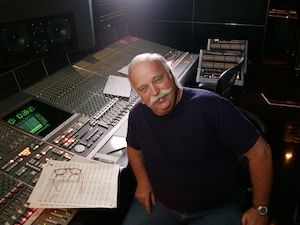 As 2014 marks Swedien's 80th birthday, the Bruce Swedien Scholarship Fund is a way for his colleagues, fans and friends in the business to express their gratitude for his many gifts while helping young recording engineers who believe in putting the “Music First!,” as is his mantra.

Since being publicly recognized in 1962 with his first Grammy nomination, for Frankie Valli and the Four Seasons’ “Big Girls Don’t Cry,” Swedien has built a peerless body of work across eras and genres. He went on to record and mix Michael Jackson's Thriller, the best-selling album in the history of recorded music. Aside from these credits, he is known for his work with Duke Ellington, Burt Bacharach, B.B. King, Jennifer Lopez, Bonnie Raitt, Edgar Winter, Barbra Streisand, Sergio Mendes, and many more. Swedien has been nominated for a total of thirteen Grammy Awards and won five. He has also been awarded 10 Grammy certificates, two ASCAP composer awards, and has been nominated for five TEC Awards. He is being awarded an AES fellowship award this year for his “impact in creating a sonic reference in modern popular music,” while his latest book, The Bruce Swedien Recording Method inspires the music world.

Those who know him are aware of his ongoing dedication to the craft of recording artistry. In addition to his talents and successes, he continues to be an open book to younger artists, imparting his knowledge and history for the benefit of the entire industry, and supporting initiatives like the AESEF. And he is also an insatiable learner himself, exchanging ideas with other top audio minds at each year’s AES Conventions and other industry gatherings.

This scholarship honors Swedien’s lifetime of excellence as a producer/engineer, musician, author, educator, and mentor for the past six decades while complementing the mission of the Audio Engineering Society Educational Foundation: to support future outstanding audio engineering professionals. Scholarships will be offered annually to graduate students in the recording arts who have a passion for maintaining the highest standards of music recording.

Bob Moses, AES executive director, stated, “This scholarship is a beautiful way to pass on Bruce’s wisdom and encouragement to the next generation. Somewhere out there is a kid making noise in a basement, destined to receive this scholarship on his way to becoming a recording legend. This is one of the most sacred and meaningful things we get to do at AES, I’m especially grateful to Bruce’s family for working with us to put it together.”