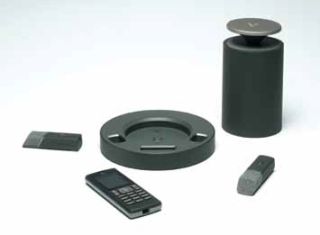 Historically, most user grievances with conference phones have revolved around the poor quality of the audio experience. As this experience is absolutely vital to a successful conference call, the shortcomings of previous generation phones can be viewed as quite significant; and manufacturers have responded accordingly. Over the last few years, companies have begun to break away from the traditional conference phone design in an effort to improve the audio experience.

The Revolabs FLX VoIPA traditional problem with conference phones has been the loudness of the speaker on the near side. For one, having the phone’s volume maxed out still just hasn’t seemed loud enough. Much of this can be attributed to the common monolithic conference phone design, with the speaker, dialer, and microphone all in one triangular component. Often, this design simply doesn’t leave room for louder—and bigger—speakers. To address this issue, many newer conference phones include better speaker elements that deliver highfidelity audio to capture the full spectrum of human speech. Other solutions now utilize multiple speakers, which can be placed in different locations throughout the room to allow participants to hear the far end better.

Another reason often attributed to the loudness problem is that some conference phones actually turn down the maximum volume of the speaker to combat acoustical echo. Echo happens when audio from the far end is picked up by the microphone on the near end— which is located right by the speaker in a monolithic design—and sent back to the far end. The result is a particularly distracting phenomenon where participants on the far end hear their own voice echoed back at them when they speak. In the past, conference phones tried to avoid the capture of the echo by going to half-duplex mode, which wouldn’t allow both sides to speak and be heard at the same time. Obviously, this caused some major disruptions in the audio experience and the overall effectiveness of the meeting. Some newer conference phones now incorporate echo cancellation technologies supporting true full-duplex conference calls allowing both sides to talk at the same time and still be heard without generating echo.

Audio pick-up is another time-honored problem with conference phones, and again, this problem can be traced back to the monolithic design. Typically, conference phones must be placed in the middle of the conference table so all participants can hear the transmission from the far side. Unfortunately, this leaves participants at the ends of the table far from the microphone and the pick-up of their voice is very limited. The result is a very common phrase: “can you say that again?”

Manufacturers are trying to eliminate this verbiage from conference calls by using wired and wireless extension microphones, which increase the area of audio pick-up in the room and allow people at the far end of the table to be heard. Wireless microphones achieve this without the tangle of cables, providing a clean look for the conference room. In addition, participants using wireless lapel microphones can be heard clearly without even having to be at the table.

Holger Stoltze is the senior product manager for Revolabs, a provider of wireless audio solutions for unified communications, enterprise collaboration, and professional audio applications. He can be reached at hstoltze@revolabs.com. What’s your view on wireless conference phones? Let us know on our AV Technology magazine LinkedIn discussion page.