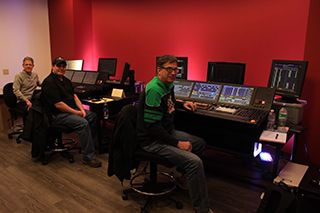 “In the training classes we have a set curriculum of master topics, which we call MA’s Golden Rules, then we add topics applicable to the users and their particular situation,” said Covell.

“Our classes are very task-driven; everyone gets hands on the console. We start from the ground up making topics more complex as we go along. They’re really fun classes – it’s always interesting to see where users take them. [The grandMA2] is an evolution of the grandMA so there’s a lot more for users to learn, like presets and a new Editor.”

For the current leg of the North American “The River Tour 2016” two grandMA2 full-size consoles and one back up unit were deployed. The tour had long used grandMA consoles for lighting control; when it migrated to the grandMA2 platform recently the team decided that training sessions would help familiarize them with the new capabilities and functionalities of the desk.

“Even though I haven’t done my own programming in quite awhile, it’s important that I understand more of the process. Over time I’ve gotten further away from modern programming techniques, but with the addition of a new console it made sense for me to learn what it can do. The grandMA2 is so user-friendly and powerful – there are a few things even I can do on it,” said Ravitz.

“We’re used to Bruce changing up the show on a second’s notice, so we need to be able to grab anything anytime. We live cue by cue with Todd at the board. For this leg of the tour we have quite a bit of new material that’s never been played live before, so we’ve had to do some fresh programming on grandMA2.”