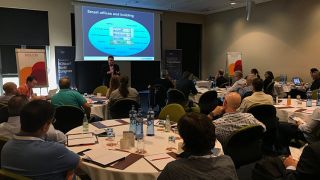 Getting granular can yield useful insights. But you have to zoom out to see the whole picture.

Analyst and thought-leader Chris Lewis inspires the HDBaseT World Congress with his keynote address, "We Live in a Hyper-Connected World."

That’s one of the inspirations behind the inaugural HDBaseT World Congress convening in scenic Sitges, Spain, October 16-18. More than seventy HDBaseT Alliance stakeholders have gathered to candidly discuss where HDBaseT stands today and where it can go in the future. Equal parts think tank and working groups, this event is a deep dive into the HDBaseT technology in the ProAV, automotive, and residential tech sectors.

The State of the HDBaseT Nation

Ariel Sobelman, president of the HDBaseT Alliance, presented "The State of the HDBaseT Nation” address at the World Congress. He said that the Alliance’s raison d’etre is to standardize HDBaseT technology, promoting it as a method to utilize data not just distribute it. The HDBaseT Alliance’s governing tenets—inclusion, evolution, and vision—ensure that all members have a voice. To that end, World Congress participants have been invited to contribute to the platform's future, addressing the problems, threats, and opportunities they can identify.

The HDBaseT Alliance was incorporated in 2010, the same year 5Play—audio, UHD video, power, USB 2.0, and control signals via IR/RS232—was introduced. Now there are more than 190 members in the HDBaseT Alliance representing every corner of the technology ecosystem. Spec 2.0 was released in 2013. In 2014, the Installer Zone was formed; thousands of global members contribute to the Zone. In 2017, the HDBaseT-IP spec was introduced.

Regarding the industry’s most influential trend, the convergence of audiovisual systems and IT, Sobelman said that the HDBaseT Alliance sees hurdles as well as many opportunities. “HDBaseT [is] well-positioned to address the challenges of this convergence with a standardized solution,” he stated. He added that one size does not fit all, and HDBaseT can help in the process of “defining the necessary requirements for each installation and offering a flexible solution.”

In his talk, "AV & IT: One World?", Paul Harris, CEO of Aurora Multimedia, explored AV over IP user requirements and infrastructure needs. He also shared candid lessons learned. "There is not one 'best product' [for AV over IP]." Rather, it is critical to take into consideration quality, performance, distances, and cost for each application.

An inspiring keynote, “We Live in a Hyper-Connected World," set the tone of inquiry among HDBaseT Alliance members. Analyst Chris Lewis shared his perspective on paradigm shifts in the IT industry. He explored how changes in storage and delivery can be instructive for ProAV and automotive industries. “From 50 bits per second in modems to the extraordinary processing and storage power we have today,” Lewis said, the adaptability of technology is arguably the most impressive aspect. This adaptability also poses big questions for the future and is engendering new exciting business models.

He added that the “inside-out” business model has flipped. We now have an industry dynamic “shaped from the outside in, led by demand,” Lewis said.

With a particular passion for assistive technologies, Lewis opined that commoditization is opening up new avenues of innovation. “We have ability to build technologies that flex around the way we want to live and work,” he said.

The cloud and network are merging to offer more robust processing and delivery methods. “This is changing the delivery mentality,” Lewis said. From fiber to licensed and unlicensed cell services, we need a more streamlined approach to the infrastructure.

As new markets emerge, Ariel Sobelman said that HDBaseT is well-placed to serve new applications, new architectures, new verticals, and new markets. “If you can control the infrastructure, you can engage more effectively with data, and drive yourself up the value chain.”

Developing an infrastructure to support software iterations is key, and to that end, Chris Lewis suggested that systems, including HDBaseT-driven systems, can help analyze data.

Lewis also explored 5G as a metaphor for the future of telecom. As a framework for licensed and unlicensed spectrum, 5G is also an example of the convergence with fiber, offering higher capacity with greater granularity, IoT, network densification, and new investment and business models.

What’s the bottom line? “Invest today in the infrastructure of tomorrow,” Lewis said.

Visit hdbaset.org to learn more. AV and IT managers, Tweet your questions for the HDBaseT World Congress to @AVTechnologyMagazine.